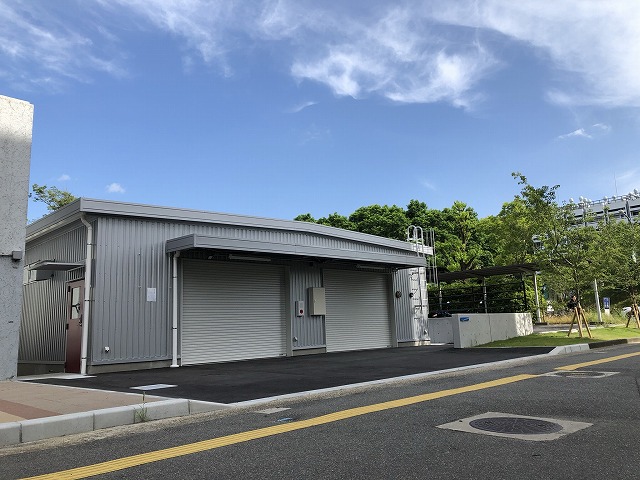 For the purpose of making a hangout spot for students of the Graduate School of Engineering, in the portion of its premises facing a pedestrian road in the school’s premises, a facility for student-lead teams to build a variety of things, such as human-powered aircraft, formula race cars, robots, and perform research. There is an open space around the building, which is in harmony with surrounding nature.

This building is named Handai Craft Base, which was solicited from OU community members, in the hope of making it a base for developing future technologies at Osaka University (also known by the nickname of Handai).

Landscaping in the Senri Gate area 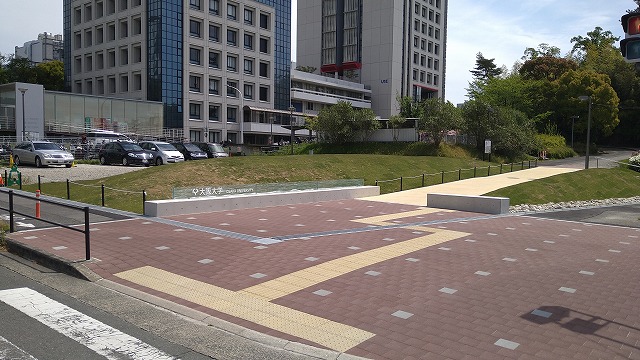 The corner of the Senri Gate intersection was landscaped to develop it into an open space with a gentle slope so that it would blend in with the terrain of the Senri Gate area and the landscape of Senri Kita Park. To make the corner an OU landmark, a glass monument sign was constructed bearing the university's name and school seal on the edge of the school premises. 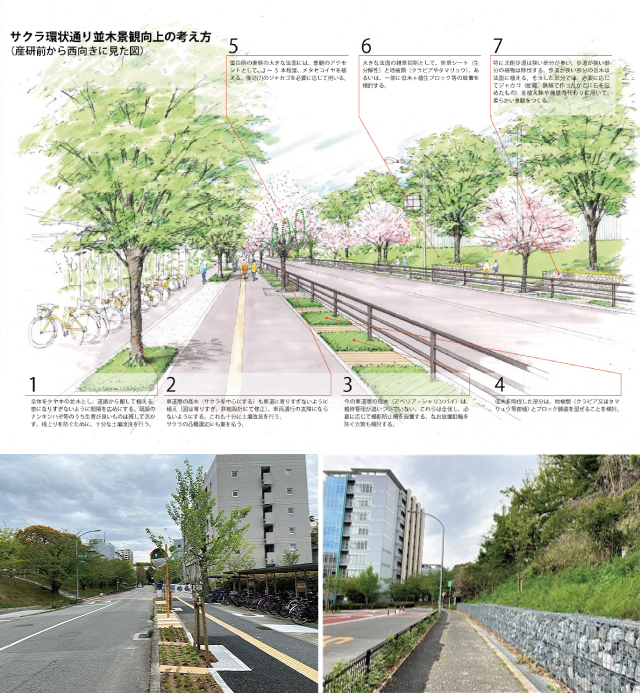 In this work project, we performed green landscaping while improving the plant growing environment and ensuring adequate sidewalk width for pedestrians to walk comfortably. We also landscaped cherry and Japanese zelkova trees, trimmed overgrown bushes that had reduced street visibility, and paved walking paths with ground cover plants and slabs to secure street visibility and excellence in design. 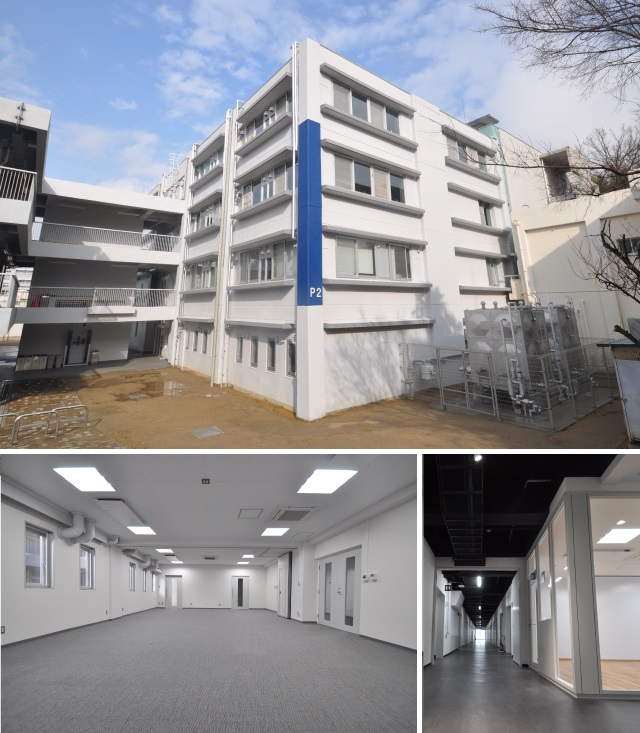 The Graduate School of Engineering carried out eco-friendly renovation work on this building, improving its function and quakeproofing in order to make it a place for conducting education and research on advanced scientific technologies and creating innovation via industry-university collaboration. This project was conducted according to the school’s policies -- i.e., "establishing a creative knowledge environment," "facilitating active collaboration beyond organizations," and "promoting cutting-edge creative science."

The rational use of the facilities by relocation of space, as well as the improvement of education and research functions using the characteristics of the university, were achieved.

This building and its adjacent Photonics Center are connected by a passageway so that students in the Applied Physics Course can easily intercommunicate. 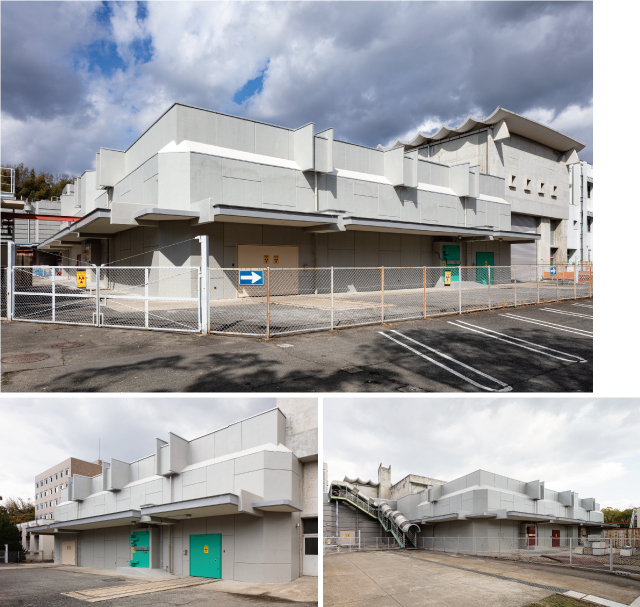 Along with the replacement of laboratory equipment, which had been used over 40 years, the improvement of functionality and the renovation of the 45-year-old building were carried out.

Construction of Building C (S9) of the Techno-Alliance Building 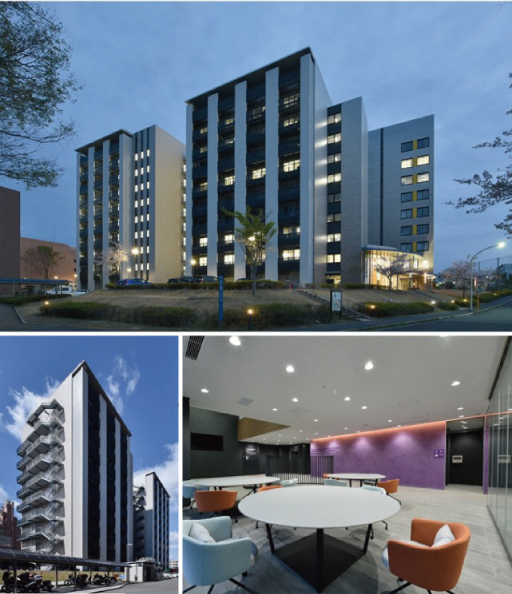 Coalescing advanced technological seeds, such as sensing and big data analysis, this building was built to implement open innovation for creating a society in which people can enjoy healthy and active lives. 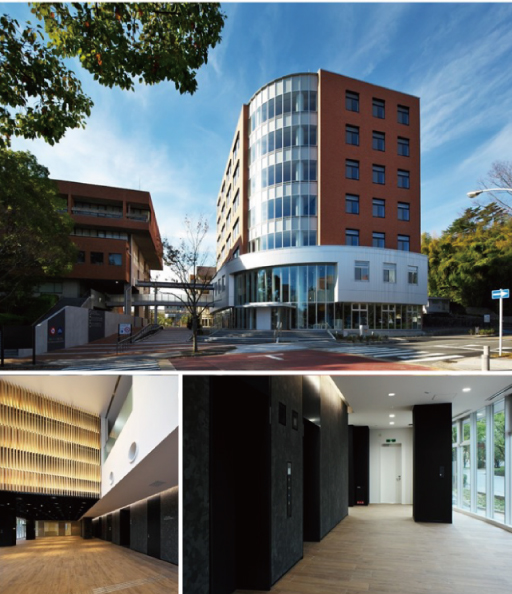 This building serves as a hub for creating innovation in science and technology by integrating fields in which Osaka University has academic strengths. 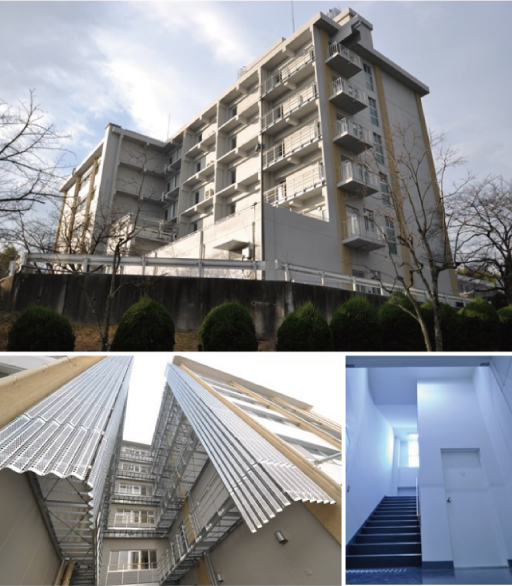 This renovated laboratory of the Joining and Welding Research Institute is a world-leading research hub and the only official comprehensive research hub for joining and welding in Japan. 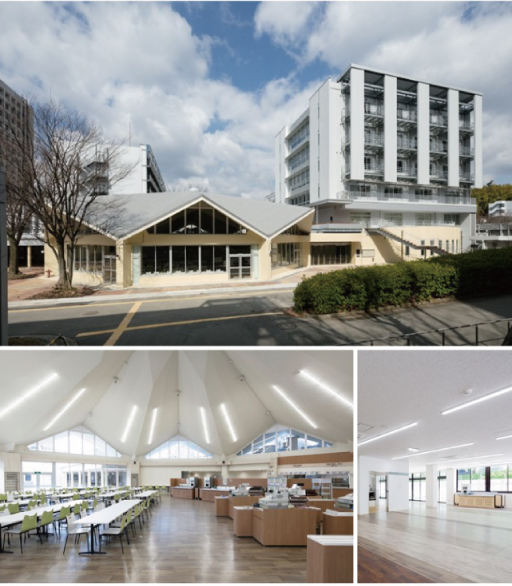 Located at the center of the School of Engineering with some 5,000 daily users, this welfare center was renovated. The complex facility, with its salon for alumni and alumni associations, was also newly built. 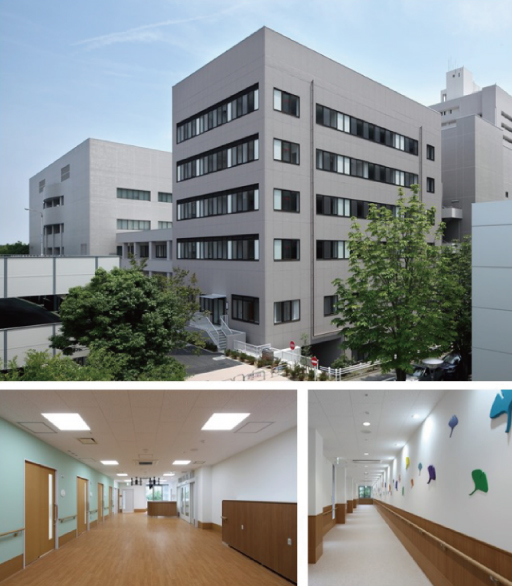 The building is designed to match its external appearance with those of existing buildings. The wooden surface of the area used by patients has many windows to let in sunlight to give users a feeling of safety and peace. 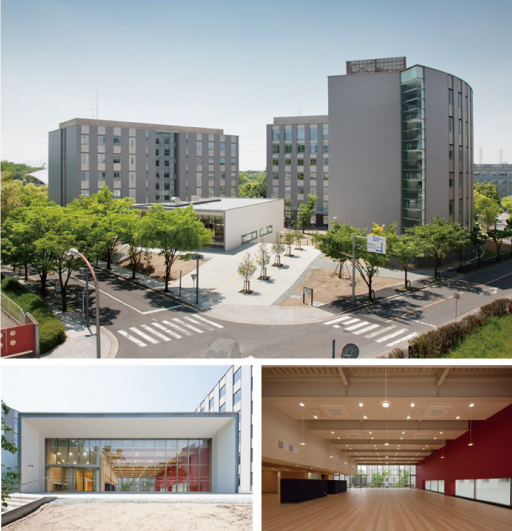 As the final chapter of the third improvement project for the Graduate School of Information Science and Technology which aims to promote interdisciplinary research, the school, which consists of the research center on the west side of the courtyard and the welfare building on the north side of the courtyard, was completed, producing the landscape that features the courtyard encompassed by the three buildings. Respecting the basic design of the school, the school building layout creates a uniform, futuristic campus landscape.

The research building has an exchange lounge with a commanding view on each floor, providing a place of communication for facilitating interdisciplinary research. The Welfare Building has a convenience store and "chill-out" restaurant on the first floor, as well as a casual cafeteria and two types of eating facilities on the second floor.

Construction of M3 Building (R5) of the School of Engineering 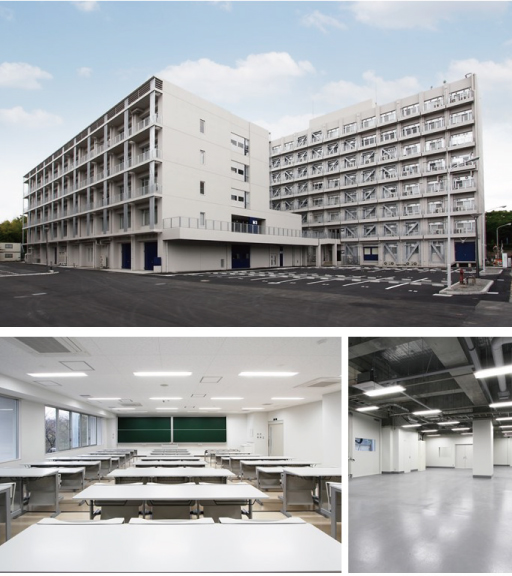 The structural setback above the third floor gives a space above the first floor, presenting a sense of comfort to the combined group of buildings in the area. The color tone of white and light gray matches with that of the surrounding buildings. 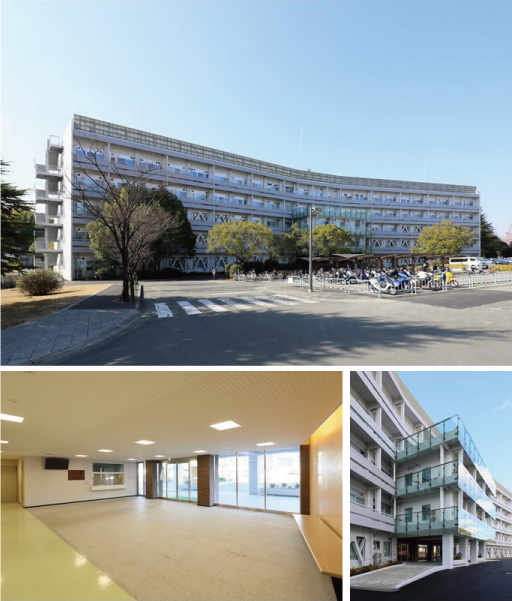 This building is the education and research building of the Graduate School of Pharmaceutical Sciences, to which seismic retrofitting and facility improvement were conducted in order to make it a unique and high-quality research hub.

Regarding the external appearance on the north side of the building, which is also the face of the building, the horizontal line of the building is emphasized while keeping its original design. Concrete handrails were removed from the central part of the building and transparent glass screen walls were installed on the facade, giving the front entrance a modern look. Laboratories with a large span structure were built on each floor so that the layout of these laboratories can be easily changed in the future. 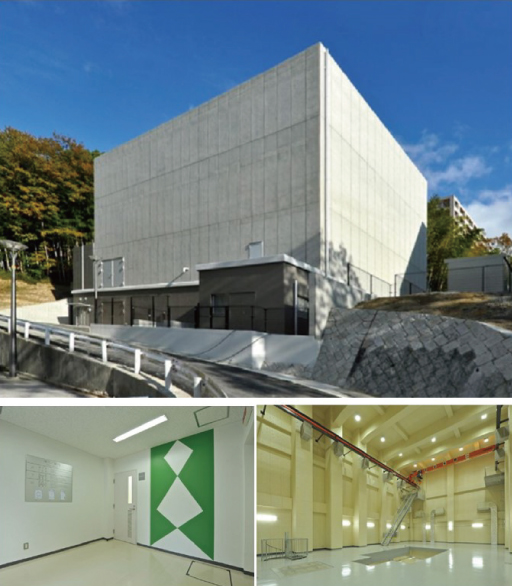 This building was structured to install an electronic microscope at a location distant from main roads on campus to reduce the impact of vibrations arising from automobile traffic while preserving harmony with existing buildings.

Preserving the unity among the totality of existing buildings, the external appearance of the building was designed to adopt the originality of the state-of-the-art electronic microscope facility. It is a simple box-shaped building for the electronic microscope. The building has few openings such as windows and is surrounded by a dry area on three sides, which look like retaining walls.

Construction of the IT Core Building (S2) of the Cybermedia Center 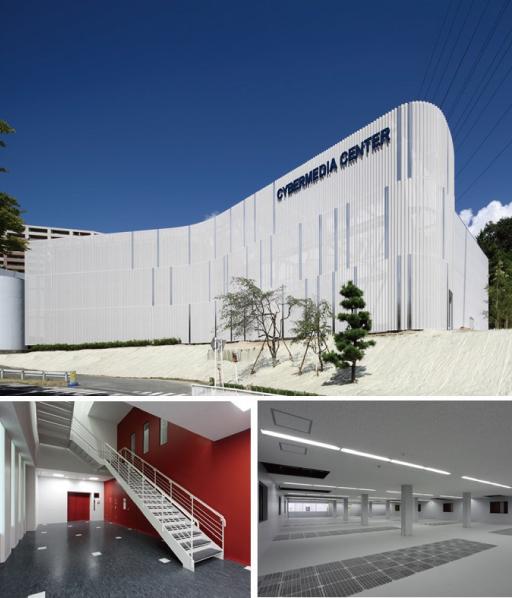 This building, a data center that houses large-scale computers, was constructed as a primary hub of the academic cloud. This building consists of an electric building and a server building. The gentle curve of the building was designed in the motif of 1/f fluctuations and expressed by transparent metallic panels, showing consideration for the surrounding landscape.

The double-walled computer and server area is on the second floor and the machinery equipment area, which includes air-conditioners and power sources, is on the first floor. 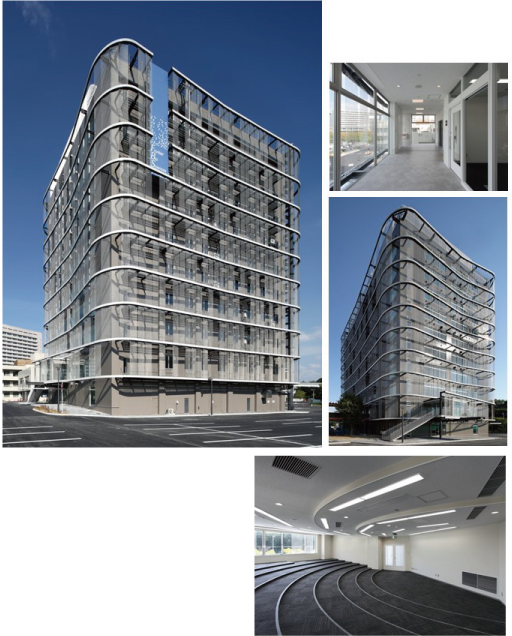 This building was constructed as an international hub of research and education of molecular and cellular imaging by consolidating state-of-the-art bio-imaging techniques based on the university’s world-class research foundation at graduate schools.

The building’s external appearance, ornamented with a double-helical-shaped stainless steel mesh  reminiscent of double helical structure of DNA, is affected by environmental influences such as light and wind, showing many faces according to the season, climate and time of day. The appearance of the building, which alters in response to environmental changes, can be compared to the outer skin and cell membrane of organisms, symbolizing this building.