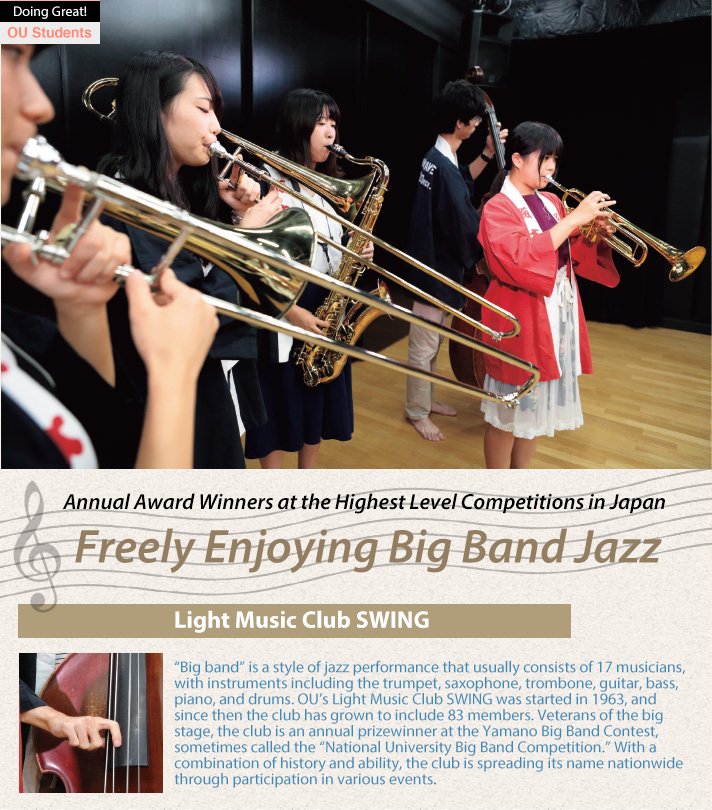 After joining the club, members enter a big band called D group.  In addition, many members form their own bands, so there are a number of personal bands within the club. Club President Ryo UENO (3rd year, School of Engineering) spoke about the advantage of scale, saying, “Just as one would expect from the large number of members, we play a wide range of genres as well. I love samba and bossa nova. Individuals who share the same taste in music come together to enjoy their favorite music in a free atmosphere.” Half of the club members start with no experience playing an instrument. The club also has no dedicated instructor, so “members just teach each other.” Independent practice that takes advantage of the strengths in their numbers has raised the level of their performances.

Winning in preliminaries again in 2017, the club receives the Judges’ Prize

The band was also selected to receive the “Student Band Award” from the votes of other participating bands, and Tatsuya ANDO (4th year, School of Engineering) won the Most Outstanding Soloist Award. Mr. Ando said, “The joy of jazz is that musicians never play it the same way,” said Mr. Ando. This year once again, Osaka University won the Judges’ Prize; a magnificent achievement!

Invited to perform at events, the band stays busy outside the university as well

Vice President Saki HASEGAWA (2nd year, School of Foreign Studies) of the “Swing Arcade Orchestra” is hard at work practicing for the International Junior Jazz Orchestra Festival (known as Stellar Jam) to be held in September. “I want to support the band as a bass instrumentalist, a rarity in the big band genre,” she said. In 2016, the Swing Arcade Orchestra took 1st place in the free song competition of Stellar Jam, with President Ueno receiving the award for Best Conductor. This year, the band received an award for best soloist. Outside of these contests, the two annual OU festivals, and regular concerts, the club receives about 10 requests a year from events outside of the university. “I’m glad we can perform on stage. I want to keep taking requests.”

With roots in the big band group formed at Osaka University in 1963, Light Music Club SWING consists of primarily 1st and 2nd year students, with a total of 83 members. The D group, to which all club members belong, holds practices twice a week at the Toyonaka campus's Meidokan, and any groups within the club formed outside of the D group hold individual practices and activities on their own. The club's headliner, "The New Wave Jazz Orchestra," placed 6th at the highest level competition in Japan, the Yamano Big Band Jazz Contest, in 2016, and a member of the group won best soloist at the same competition. An annual prize winner at the contest, in 2017, the group once again took home an award, winning the Judge's Prize. 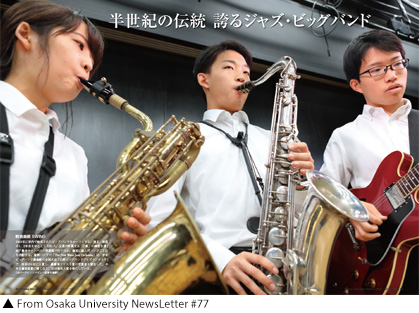