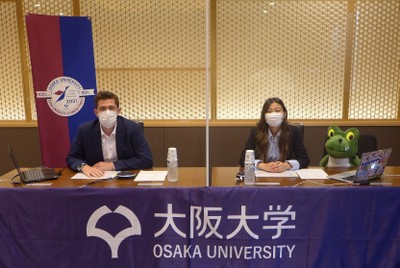 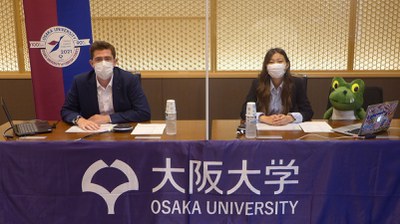 The Osaka University Student Movie Contest solicited 3-minute film works on the theme of “3 Minutes of Inspiration for Sustainable Development” from students from OU and its overseas partner universities, receiving 69 videos from 10 countries.

Prior to the award ceremony, greetings and a lecture on OU's endeavors to achieve SDGs by Executive Vice President KAWAHARA Genta, as well as passionate messages by KAWASE Naomi (Film Director) and Murali Chandrashekaran (Vice Provost (International), University of British Columbia), were given to students.

At the award ceremony, 12 prize winners were announced by the following final judges:

In the forum, after a speech to the students of his own age from SAKUMA Hiroshi, Director of the Virtual Osaka Pavilion, the 2025 World Exposition in Japan, presided over by three OU students, the prizewinners exchanged their opinions in a panel discussion. Finally, President NISHIO Shojiro gave a closing greeting by congratulating the award recipients and thanking all participants, ending the forum on a high note.

This forum welcomed 234 participants from 42 universities (including OU) in 15 countries , making for a wonderful opportunity for individuals from around the world to hold discussions about SDGs online.

You can view all the prizewinning short films at the Student Film Contest YouTube Channel by clicking here .