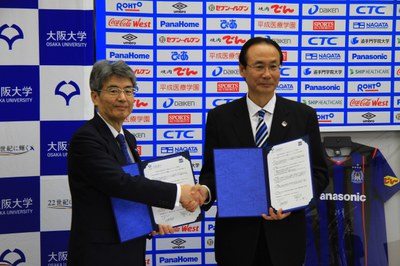 On May 20, Osaka University and Gamba Osaka signed a friendship agreement on cooperation in sports medicine and health guidance. Last year Osaka University made its athletic field available to Gamba Osaka who had lost their place to practice during the construction of a new soccer stadium, a situation which led to the sign of this agreement.
Following the signing ceremony, NORO Teruhisa, President of Gamba Osaka, and President Toshio HIRANO spoke about their intentions to become world-class even though they were in different leagues. Furthermore, they agreed to have discussions on advancing mutual cooperation in the future.