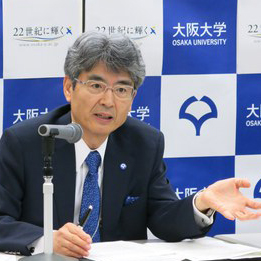 In order to promote academic initiatives aimed at making Osaka University an internationally competitive center of education and research, the university has created an official title " Osaka University Distinguished Professor " in order to recognize individuals who play leading roles coupled with outstanding achievement.
The selection committee, which included outside members, examined the achievements of individuals recommended by educational research and education organizations and by OU vice presidents. The committee moved to grant the title of "Osaka University Distinguished Professor" to the ten recipients noted below.

President Hirano announced those who received the title.

1. Individuals who have achieved outstanding recognition such as receiving one of these  prizes: Order of Culture, Person of Cultural Merit, Japan Academy Prize, Japan Prize, Medal with Purple Ribbon, Kyoto Prize, and/or international prizes equivalent to the above.
2. Individuals who achieved some other type of outstanding achievement equivalent to the above.