On Friday, February 22, the three national universities in the Kansai region -- Kobe University, Kyoto University, and Osaka University -- held a joint symposium, "The World as revealed through Large-Scale Simulations" at the Convention Hall, Integrated Research Center, Kobe University.
Focusing on large-scale simulations by super computers and our future, lectures were delivered on the significance of the development of the K computer and the latest research achievements using supercomputers.

K computer is a supercomputer developed by Riken's Advanced Institute for Computational Science, which was made available for use by members of academia and industry in September 2012. About 300 citizens, businessmen, and university people listened the lectures attentively.
This symposium started with greetings from FUKUDA Hideki, Kobe University President, HIRANO Toshio, Osaka University President, and MATSUMOTO Hiroshi, Kyoto University President.
In his speech, President Hirano said, "Large-scale simulations need computational ability as well as new mathematical science algorithms and software capable of rapidly processing the algorithms. Interdisciplinary cooperation among researchers in mathematics, physics, chemistry, and information science will contribute to the development of large-scale simulations. This movement will produce a new paradigm for biosience and, in exploring this paradigm, personnel are of the essence."
Following his speech, NAKAMURA Haruki, Professor at the Institute for Protein Research of Osaka University delivered a keynote speech. Under the theme of "Information and Computational Science in Bioscience," he talked about the current situation of increasingly-sophisticated simulated calculations for biological molecules. In the following panel discussion "What can Supercomputers do?" the panel discussed possibilities of K computer research. 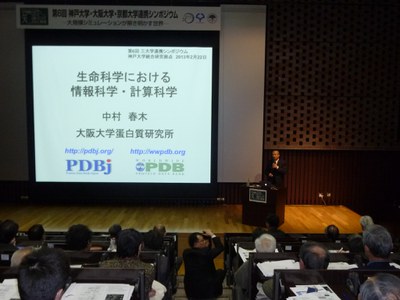