Professor Shinya FUKUNAGA still continues to perform research on the formation process of the ancient states of Japan, expanding the field of his work both inside and outside of Japan from a comparative archaeological perspective.

He has performed excavations of kofun tombs, or tumuli, primarily in the Kinki region, including the Inagawa area in Hyogo prefecture. Currently, he is investigating the Banraisan kofun , located in Takarazuka city. " Kofun are not yet fully understood. I want to clarify the link between the transition of the Yamato Court and the Inagawa region."

Since 1986, Prof. Fukunaga has also been affiliated with The Office of Archaeological Heritage Management at Osaka University, at which he was also involved in surveys and preservation of the group of kofun on the Toyonaka campus. "From the Yayoi period until the modern day, the area around Machikaneyama, which overlooks the fields below, was an important location strategically as well. We've found a number of important cultural properties that show 'regional history' that you cannot find in historical literature."

Prof. Fukunaga caused a stir in the large debate over the location where the triangular-rimmed ancient mirror decorated with gods and beasts, said to have been given to Princess Himiko by China's Wei dynasty, was actually made.

He was also involved in the excavation of remains of medieval cities along the Turkish Mediterranean coast for 10 years. 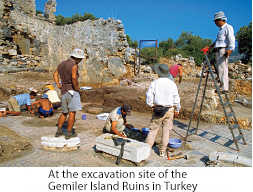 It was a meeting with his mentor, Professor Hiroshi TSUDE (currently Osaka University Professor Emeritus), that led Prof. Fukunaga to archaeology . " I got involved in excavation very casually, being invited by Professor Tsude for drinks after finishing work. When I was in elementary school, we found some ancient pottery in the soil that was to be used in construction of our garden, and I found it mysterious that something made by people from such a long time ago can just come out of the earth. Excavation brought back those childhood memories of gathering and interacting with the things that I found, which was so interesting.

The reason I went into archaeology could have been the drinks I had that night," he laughed.

The appeal of archeology is feeling the "connections." "When I interact with ancient pottery, it feels like I'm having a conversation over time and space directly with people from the distant past." At excavation sites, Prof. Fukunaga also meets people from the area, creating exchange that crosses over generations. "Working collaboratively with many people actually makes me happy," he said with a smile, as if he felt like a kid again.