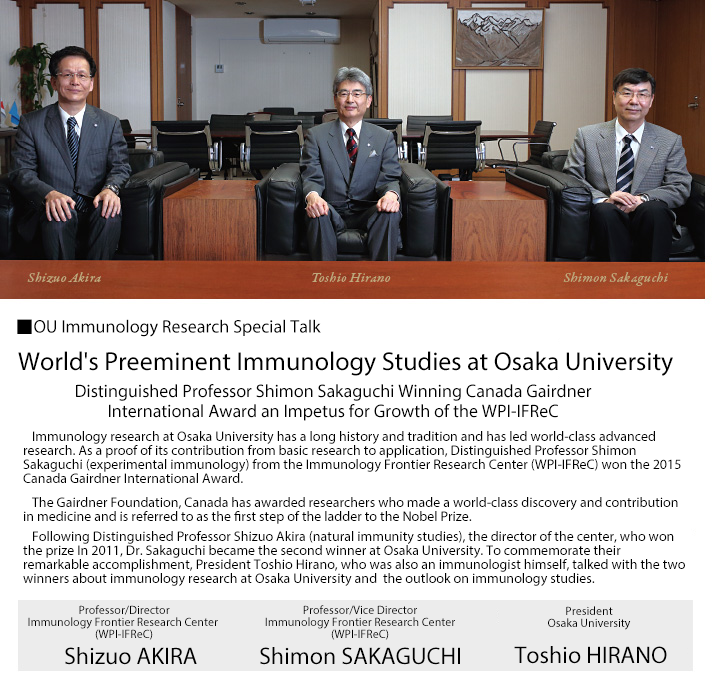 Hirano : Prof. Sakaguchi, congratulations on winning the Canada Gairdner International Award. As a president and as an immunologist, I'm very happy. This is a great honor for both Osaka University and Japan.

Sakaguchi : I'm very honored to receive such a respected award. I've been involved in basic research on immunological control for a long time. I was awarded this prize for my achievement in the discovery of regulatory T cells that control the immune system, the clarification of their role in immune system, and their application to the treatment of autoimmune disorders and cancer. I appreciate the support from Osaka University very much.

Hirano : Prof. Akira, you also received the same award. What do you think about Dr. Sakaguchi's feat?

Akira : This award means that his research was recognized as unique research. It made the high level of immunology research in Japan known to the world.

Hirano : Would you tell me about the outline of your research?

Sakaguchi : In the field of medicine, strengthening immunity has been a challenge. But my approach is the exact opposite; I have been involved in research regarding negative control of immune response, that is, how to make it possible to refrain immune response from happening. If immune response can be controlled through the clarification of regulatory T cell function, the prevention and treatment of autoimmune diseases such as rheumatoid arthritis, connective tissue disorder, and allergies due to an overreaction of the immune system as well as the suppression of rejection reaction after organ transplant will become possible. But as for cancer cells, immune response should be induced. If immunosuppresive effects can be relieved, immune response will increase and stave off cancer cells.

Hirano : How did you discover regulatory T cells?

Sakaguchi : Some time ago, it was thought the presence of suppressor T cells was involved in the immune system. In the late 1970s, active research was performed under the theory that certain types of T cells with acquired immunity suppressively terminate immune response. However, when researchers tried to explain autoimmune diseases with the view of suppressor T cells, which was a global trend at that time, it didn't make sense. Since they could not identify suppressor T cells, research lost its momentum rapidly in the early 1980s.

Hirano : Prof. Sakaguchi, you studied in the same category. You had to fight against headwind, I presume.

Sakaguchi : I continued my research because I was not able to explain immune responses without the presence of regulatory T cells of some sort. I published my thesis, but the response was not the greatest. People were rather surprised to know that there was still a researcher who examined this topic. However, a fellowship for eight years, the best in the U.S. at that time, saved me. Experiments performed in the '80s determined the presence of regulatory T cells. When certain types of T cell groups were removed from healthy mice, they developed autoimmune diseases. That demonstrated that T cells developing autoimmune diseases were present in healthy individuals and T cells in the removed T cell groups had a sort of suppressive function. Finally regulatory T cells saw the light. The discovery of  markers: CD25 molecule in the mid '90s and transcription factor Foxp3 in 2003, sparked regulatory T cell research.

Hirano : Prof. Sakaguchi, you persisted in conducting research and achieved results with the belief that the phenomenon you had found was right. Your persistence is a model for researchers. Prof. Akira, you took up the field of natural immunity from that of acquired immunity, didn't you?

Akira : I changed my research theme from the clarification of a mechanism of acquired immunity, the mainstream of immunology at that time, to research regarding cytokines (proteins that transmit intercellular information) produced by immune cells, to natural immunity. I moved to Hyogo College of Medicine and my working environment changed, so I wanted to find my own research theme. Then, I produced many different molecule-deficient mice and thoroughly examined gene function. As a result, it was found that natural immunity did not attack intruders at random as was thought conventionally; many kinds of TLR (Toll-like receptor) in a cell membrane acted as a sensor and responded to different germs and viruses.

Hirano : The research results were so sensational that they overturned the fixed immunity theory, weren't they?

Akira : The great discovery was brought by chance. A graduate student performed experiments to inject lipopolysaccharide (a major component of the outer membrane of Gram-negative bacteria, causing septic shock) into MyD88-deficient mice. Normal mice went into shock and died, but these knockout mice didn't die. This fact showed the presence of receptors that triggered shock by acting in reaction to lipopolysaccharide upstream of signal transmission route leading to MyD88. I thought I needed to take a serious approach to this. I came up with TLR that had been just identified in humans. Then I found that it was TLR4 that recognized lipopolysaccharide. Following that, by making use of TLR-deficient mice and MyD88-deficient mice, I succeeded in clarifying most TLR ligands (substances bonding to a specific receptors).

Hirano : Prof. Akira, can I say that your success is because of your serendipity?  When you got unexpected results in basic research, you didn't overlook them.

Akira : I always wanted to address my own theme. My strategy is to move towards the direction of the research in which I obtained interesting results. My theme changes every couple of years.

Researchers Must Be Optimistic -- Positive Thinking Creates a Virtuous Circle

Hirano : You two have a stance in common: ascertaining the true essence of things, but your approaches to research are opposite, which is interesting. What is your belief in conducting research and what motivates and inspires you when handling adversity?

Sakaguchi : I think it's of value in finding more general principles and more persuasive ideas behind biological phenomena. You may think that I have been doing this in my own way. Compared to dominant ideas of various periods, I have been sticking to my idea in the belief that my idea was right.

Akira : I get excited with interesting data and as a researcher, it's a great pleasure to find what others don't know and be evaluated for what I've done. Research is attended with much difficulty, but it's easy to forget these things. Positive thinking produces a virtuous circle. That's why being optimistic is an important factor for researchers.

Hirano : Researchers should see everything through rose-tinted glasses; otherwise, it's hard to continue research. Research is a series of failures. Self-examination through objective analysis is important, but pessimists end up collapsing even if they have a talent for research. You talked a bit about your beliefs and hardships. Let me know about your research goals in the future.

Sakaguchi : I want to advance my research of regulation of immune response while incorporating current technology. The study of immunology is close to the study of human diseases, so the phenomena I found in mice and my ideas about them can be applied to humans. I want to open up new ways for preventing and curing immune diseases.

Akira : I was a graduate of the school of medicine, so I want to conduct research leading to medical care. Recently I've been involved with basic research focusing on the medical field such as fibrosis and cancer, as well as collaborating with businesses.

Hirano : Dr. Akira serves as a director and Dr. Sakaguchi serves as a vice director at Osaka University Immunology Frontier Research Center (IFReC). Please tell me about the future of immunology and your hope for nurturing of young researchers.

Akira : IFReC has already been recognized by immunologists around the world. If Japan has no hubs of immunology studies like universities in the U.S. such as Harvard University and Stanford University, Japan cannot win such international competitions. Scholarship is integrated by making use of technology in various fields of study. So if immunology becomes a dominant field of study, this will lead to the development of all disciplines. Furthermore, outstanding young researchers are born from a oustanding environment. So I believe that young people responsible for the future will be produced by keeping IFReC and instilling them our way of thinking and style of performing experiments.

Sakaguchi : Since immunology is related to all diseases, it is expanding as a discipline. The presence of IFReC as the hub for research in Japan will further enhance the quality of immunology studies. Furthermore, like universities having a tide of Nobel Prize winners, I believe that IFReC will also produce outstanding young researchers.

Sakaguchi : As you dig into a phenomenon you are interested in, you will run into a basic concept at the foundation, the part connecting with others. That's why I want them to cherish their interest.

Akira : I think it's important to spend your days longing to be successful in what you like. Because you only live once, if you turn defiant, good luck will come your way.

Hirano : Regardless of if you are a researcher, politician, businessperson, or artist, it's important to live this moment to the fullest. A life is the accumulation of such moments. Thank you for your time in spite of your busy schedule.

Prof. Akira and Prof. Sakaguchi, the winners of Canada Gairdner International Award are at the vanguard of immunology studies at Osaka University. Osaka University will celebrate the 100th anniversary of its founding in 2031. We aspire for becoming one of the world's top 10 research universities by our 100th anniversary. We work out a plot for the World Tekijuku; young people will gather from all over the world at Osaka University, the World Tekijuku, to learn and research, and they will soar from it. As a comprehensive university, in addition to increasing diversity in scholarship, we need to strengthen the fields of study such as cognitive brain science and photon quantum science. Immunology, a strength of Osaka University, will become a big pillar for establishing the World Tekijuku. In that sense, as president, I expect that Prof. Sakaguchi's winning of the Canada Gairdner International Award will become an impetus for enhancing the presence of immunology studies at Osaka University.

SAKAGUCHI Shimon
A Graduating of the Faculty of Medicine (1976), Prof. Sakaguchi became a medical staff at Kyoto University Hospital in 1981. In 1983, he obtained his doctor's degree in medicine. In the U.S., he served as a visiting researcher at Johns Hopkins University (1983) and Stanford University (1987). He also served as an assistant professor at the Department of Immunology and Microbial Science, The Scripps Research Institute (1989) and the University of California, San Diego (1991).
He became a permanent research staff member at Sakigake 21 Planning, Research Development Corp. of Japan (1992), a head at the Immunopathology Department, Tokyo Metropolitan Institute of Gerontology (in 1994), a professor at the Institute for Frontier Medical Sciences, Kyoto University (1999), and a director at the Institute for Frontier Medical Sciences, Kyoto University (2007).
He has held his current position as a professor and vice director at the Osaka University Immunology Frontier Research Center since 2011. His research themes are regulation of immune response and its application to treatment.

HIRANO Toshio
A graduate of Osaka University's Faculty of Medicine in 1972, President HIRANO studied at NIH (U.S.) from 1973 through 1976. He became an assistant professor at Kumamoto University in 1980. He became an assistant professor in 1984, a professor at Osaka University in 1989. Following that, he became a director at the Graduate School of Frontier Biosciences in 2004, a director at the Graduate School of Medicine, and a dean at the Faculty of Medicine in 2008. He assumed the the 17th presidency of Osaka University in August 2011. He served as Chairman, Japan Society for Immunology (2005~06). He is also a member Council for Science, Technology and Innovation, The Science Council of Japan. He has a doctoral degree of medicine. His awards include Sandoz Prize for Immunology, Osaka Science Prize, Academic Award of the Mochida Memorial Foundation, Medical Award, Fujiwara Prize, Crafoord Prize, Japan Prize, and Medal with Purple Ribbon by the Emperor of Japan.