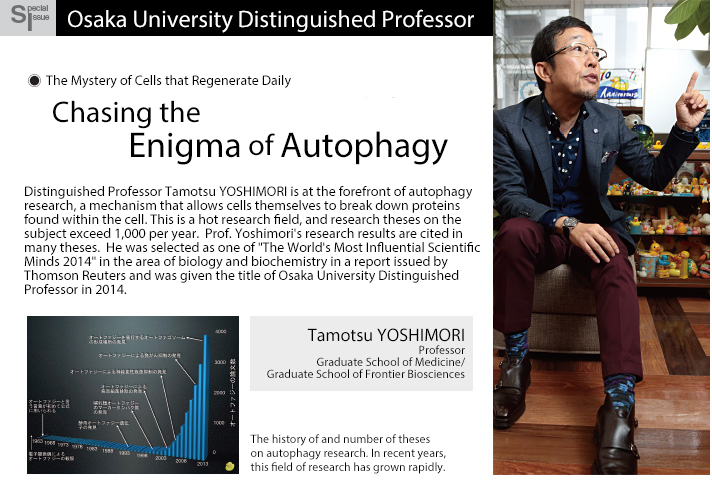 When he was as student, Distinguished Professor Tamotsu YOSHIMORI once considered working at a private company, but his meeting with Professor Yoshio OKADA, recipient of the Order of Cultural Merit in 1987 and was internationally known for his research regarding cell fusion, changed his life dramatically. At the time, the Okada Laboratory was full of people who would play a key role in the academic world, and Prof. Yoshimori experienced the enjoyment of research to find things no one knew. Turning down offers from companies, he decided to go into scholarship. On Prof. Okada's advice "See not crushed cells, but living ones," he researched transportation systems in cells. Prof. Yoshimori says, "Inside a cell is a universe, a society. It's full of mysteries."

An Encounter with Autophagy

After working at universities and research institutes, Professor Yoshimori studied in Germany. After retuning to Japan in 1996, he couldn't find a position as a researcher and was at a loss as to how to continue his research. OSUMI Yoshinori (currently Specially Appointed professor at Tokyo Institute of Technology), who discovered yeast's autophagy gene, invited him to the National Institute for Basic Biology. This was his encounter with autophagy, and the second turning point in his life as a researcher.

At the time, autophagy research was a study of an unknown field. "Although I knew that there was such a phenomenon, I didn't have a clue about studying it." Enchanted with the unknown field of research, Prof. Yoshimori pushed forward with his research. Regarding the gene that Prof. Osumi found in yeast, Prof. Yoshimori examined cultured cells of mammals and humans. The number of citations of Prof. Yoshimori's theses about the discovery of marker of autophagosome expression exceeded 3,000, which stands out from other researchers' in the field of autophagy, expanding the research area.

Autophagy has important functions. One of these is to decompose its own proteins in order to transport unnecessary substances in the cell to lysosomes, a kind of degradation factories, to obtain materials for composing proteins and acquiring energy. A second is to attack not only its own protein, but also bacteria that invade the cells. This discovery totally overturned the concept of autophagy. He says, "This function worked to protect the cells, which was beyond its original function of reusing proteins. It was quite the surprise."

Prof. Yoshimori also solved the mystery of how autophagy detects bacterial invasion, which advanced the clarification of autophagy in terms of innate immunity.

Autophagy is not only related to infectious diseases and immunity, but also breaks down abnormal lumps of proteins manifested in Alzheimer's disease and Parkinson's disease. In lifestyle-related diseases such as hyperuricemia, hyperlipidemia, and type 2 diabetes, lysosomes are damaged. Prof. Yoshimori found that autophagy removed damaged lysosomes, naming the phenomenon "lysophagy." It is also known that various disorders will develop if autophagy does not work.
Interesting results about cancers were also obtained: while autophagy suppresses cancer, cancer cells use autophagy for their survival.

It was found that the fundamental function in a cell, autophagy, was directly connected with diseases, a major source of concern for people today. Now, autophagy research has become one of the most noteworthy field of study in the world. In the number of citations per paper, the top five researchers are Japanese, including Prof. Yoshimori, who lead the world. More and more young people are aiming to become researchers in this field. Prof. Yoshimori gives his advice to his successors, saying "Whatever their motivation is, I want them to continue to have intellectual curiosity of pursuing what no one knows."

Currently, at Osaka University, with a view to clinical application in a wide area, Prof. Yoshimori is taking the initiative in preparing for establishing an Autophagy Center, tying up diagnosis and treatment departments. Research by Prof. Yoshimori and his staff will pave the way to treatments for lifestyle-related diseases and cancer in the near future.