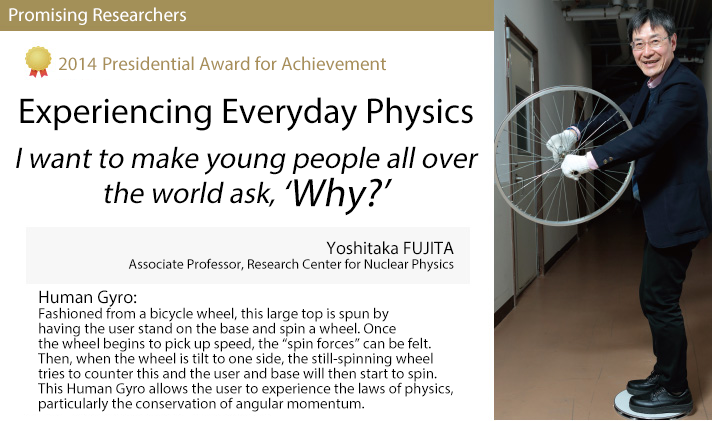 Associate Professor Yoshitaka FUJITA’s field is nuclear physics, but from the bicycle wheels to the cardboard box with something stuck to it, it seems that, on first glance, his office is full of things that have nothing to do with physics. “After you listen to one of my stories, this heap of junk will look like a treasure box,” smiled Assoc. Prof. Fujita, who, in addition to his research activities, has also poured his energy into education. These endeavors in education have earned him the 2004 Presidential Award for Achievement in “Social and International Contribution.”

While doing post-doc study abroad in Germany, Assoc. Prof. Fujita saw the students learning with such vitality that he began to worry about the students of Japan, whose studies mostly relied on memorization as opposed to comprehension.

In fact, everything in his office are devices that can be used to easily experience physics (left photo). “It’s difficult to visualize something just by looking at the formulas in a textbook, but when you actually experience the laws of nature with an ‘Ah! I get it!!’ it helps lead to real understanding.”

One of the projects that Assoc. Prof. Fujita has been involved in is called SAP, or Saturday Afternoon Physics. This 6-week lecture series started to celebrate the World Year of Physics is aimed at showing high school students the fun of science and fostering students’ curiosity through experiencing the mysteries of physics all around them. This was based on a similar program in Germany called “SMP (Saturday Morning Physics).” SAP is now entering its 11 th year, and the number of students who have gone through the program numbers over 1,000. There have even been students who have gone on to enter the School of Science after graduating high school.

Assoc. Prof. Fujita’s passion for education even extends overseas, where he has given lectures to early-career researchers and students during his own research in Vietnam, Myanmar, Germany, Finland, Spain, and South Africa. “I want to motivate students around the world by telling them about the interesting things we’re doing in Japan,” says Assoc. Prof. Fujita. “‘Nature’ is full of so many interesting things. I want to convey that feeling of wanting to ask why,” he adds, further displaying his passion for education.