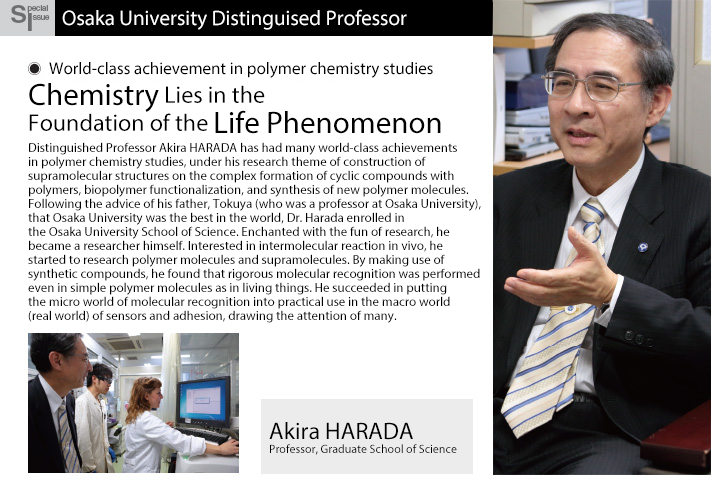 The Discovery of Rigorous Molecular Recognition in Living Organisms, a World First

In polymer molecules, large amounts of molecules are tightly bound and arranged in chain. Not only synthesized polymer molecules such as plastics and synthesized fiber, but also proteins and DNA in cells of living things are composed of natural polymer molecules. Supramolecules are comprised of supramolecular assemblies, which are non-covalently bonded complexes of two or more molecules and possess structures, natures, and functions beyond a single molecule.
Having a strong interest in intermolecular reaction in vivo, Professor Harada began his research. He was interested in the functions of flora and fauna as a child. He used to visit the laboratory of his father, a microbiologist who studied fermentation at the Osaka University Institute of Scientific and Industrial Research, and observed plankton with a microscope during his summer holidays.
"From back then I had the feeling that chemistry lied in the basis of life phenomenon. Actually, a molecule recognizes other molecules, which proves that it is alive. Biological polymers accurately distinguish molecules which fit themselves and get together to make one structure.  As my research on polymer molecules and supramolecules progressed, I started wondering if it would be possible to do the same artificially."
In order to find out how other molecules recognize supramolecules, he studied creation of supramolecular structures by molecular recognition of polymers and found that molecular recognition was performed in synthetic polymers as in living things, a world first. 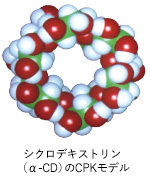 The key experimental material was cyclodextrin (CD), doughnut shaped circles of glucose molecules capable of taking in many organic compounds inside the holes. Professor Harada wondered if it was possible to take in a  long polymer with large molecular mass in CD holes. In the beginning, he couldn't get results as he had expected, but finally, he succeeded in synthesizing a supramolecular polymer (polyrotaxane) in which artificially synthesized polymers in chains could string together CD like beads. This was an artificial supramolecule: molecules assembled through molecular recognition with just enough power to attract each other. This thesis was featured in the British science magazine Nature in 1992. Supramolecular polymers are used for coating for cell phones. His research is selected as a major research of Impulsing Paradigm Change through Disruptive Technologies (ImPACT) sponsored by the Cabinet Office.

A Method for Bonding Materials via Chemical Reactions without Adhesives

His research on the use of monoclonal antibodies (antibodies derived from one gene) as chemical substance has drawn people's attention as innovative research. By making use of antibodies, he achieved artificial photosynthesis and enzyme-like reactions as well as the development of sensors to detect danger signals. While there are three main types of cyclodextrins (α-cyclodextrin, β-cyclodextrin, and γ-cyclodextrin), there are 500 million types of monoclonal antibodies, and they accurately recognize others to bond with. Thus, he wondered if it was possible to use them as new functional molecules.

His latest topic is the development of a new technique for directly bonding materials via chemical reactions. By utilizing a Suzuki-Miyaura coupling reaction (one of important reactions forming a bond between carbon molecules), he succeeded in achieving adhesion through direct covalent bonding, a world first. Since materials are firmly adhered to one another via the formation of covalent bonds, they won't separate in organic solvent. His idea that if molecules react each other, parts of molecules could react and bond led to his success. The online news about this research result reached 8,900 page views, receiving a great response from the public.

Professor Harada's achievement has drawn attention from all over the world. "Research on taking the micro world of molecular recognition into the macro world is an unknown field of study. My biggest success is that I embodied molecular recognition in the macro world, the real world. Recently I found in experiments that if one understands how high molecules are recognized by other molecules, we can make something that acts like living things by using synthetic polymers and we can make possible what living organisms cannot do." His thesis, "Macroscopic Self-assembly through Molecular Recognition" in Nature Chemistry , was selected as being in the top 2 percent of must-read papers by the Post-Publication Review.

He puts an emphasis on philosophy in studying science. He advises younger researchers and students, saying "Do not be influenced by others, but pursue the true essence of things. Universities must take the initiative in doing so. It's important to take a stance to think what contribution you can make from a wider perspective. To this end, you need to know things outside of your field as well."

Following that, he served as an assistant at the Osaka University School of Science in 1988, a visiting researcher at The Scripps Research Institute in 1990, an assistant professor at the Osaka University Graduate School of Science in 1994, and then became a professor at the same school in 1998. He has held her current position as a distinguished professor since July 2013. His achievements have earned him the Japan IBM Science Award in 1993, The Society of Polymer Science Award in 1999, and The Chemical Society of Japan Award in 2012.