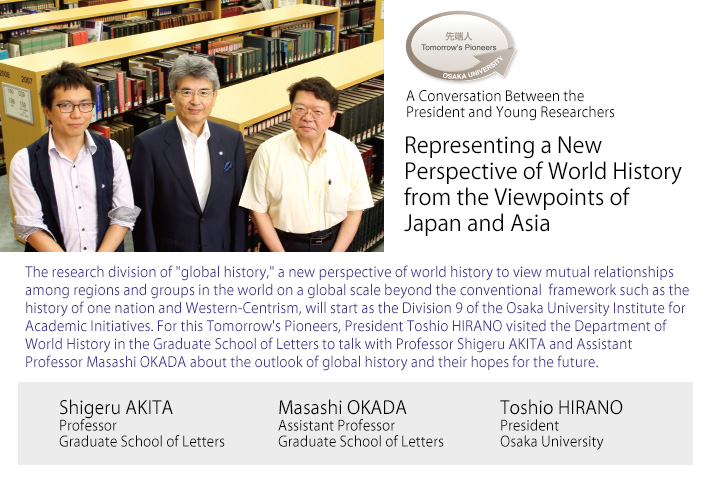 Rethinking the Conventional Perspective of History, or Western-Oriented History

HIRANO In a globalized world, Osaka University aims to create harmonious diversity for the development of human society. I think taking a wide view of the history of the world not from one nation's framework, but from the viewpoint of global history is essential for bringing about 'harmony' in the human race. First, Professor Akita, a specialist in the history of British Empire and the history of Asian international relationships, what research are you involved in?

AKITA Conventional world history research was Europe-oriented, so I wondered what a new perspective of history will be described by viewing it from an Asian point of view. I have been engaged in research to rethink modern world history by focusing on the history of Asian politics, diplomacy, and economy. In conventional modern history, Asia was placed in a subordinate position to Europe and the aspect that Asia was economically exploited by Europe has been emphasized. However, I want to clarify how modern Asian dynamism was created while getting contact with Europe and the United States by demonstrating specific historical materials to build a new perspective of world history.

HIRANO World history research was Europe-oriented. Is that because historical science was an academic system born in Europe?

AKITA One of the reasons is that Europeans, Anglo-Saxons, in particular, have an advantage of sharing information in English. In addition, Japan's historical science itself was imported from outside after the Meiji Period. And researchers have been considering the perspective of history based on the framework that Europe dominated the world to the present. I'd like to undermine that. Witnessing the current economic momentum in East Asia, historians of sound judgment in and outside of Japan have begun to think that it’s necessary to rethink about the perspective of world history which has been Europe-oriented.

Even Micro Movements in Society Connect to the World

HIRANO Professor Akita tries to think about the world not from a local viewpoint but from the whole as well as a variety of interaction including economic activities, don't you? Professor Okada is a specialist of the history of mountainous areas in South-Eastern Asia in the 18th~20th century. Would you please elaborate on your research?

OKADA I perform research on ethnic groups in Southeast Asia, which are a minority in the current national framework. I visit villages in northwestern Vietnam in particular, and conduct field research about social changes in Tai peoples and their trade of forest products produced there. Tai peoples’ society is regarded as a marginalized ethnic group in Vietnam; however, it was found that their society played an important role in connecting nations in Asia such as connecting China with Southeast Asia, Thailand with Laos, and Vietnam with Thailand. Even though it is a marginalized small society, if we examine it intensively, we can find it is connected with Southeast Asia, with Asia as a whole, and with global trends.

HIRANO Your research style resembles looking at the world from a tiny hole, like a peephole on a door, isn't it? What made you research marginal populations?

OKADA I care about details by nature. (laughs) First, I was interested in Vietnam located in the south of China, and studied there. Later, I became interested in Tai peoples, an ethnic minority group marginalized in Vietnam, and began my research. In my current project, I want to elucidate how they maintined their environment while taking the initiative in economic development during the period between the late 19th century and the early 20th century when most parts of Asia were colonized and marginalized in an economic system led by Western nations. Just like Professor Akita, I think global history is a practical field of study to understand an Asia full of life.

AKITA Our project consists of research at four levels: at the local level like Professor Okada's research, a national level, a wide regional level, and a global level similar to my own research. I'd like to think of world history through interactions at these four levels. For European historians, the non-Europe world cannot become a subject to their main historical analysis. In that sense, Japan has the accumulation of research covering various regions and nations and can take advantage of it in thinking about global history.

HIRANO Does the viewpoint of economic activity become an important factor in considering global history?

AKITA I think so, and analysis from an economic viewpoint is the most advanced; however, besides economic history, it's possible to examine the global history from the viewpoint of spread of thoughts and religions, as well.

HIRANO How do you want to develop global history research at Osaka University?

AKITA I'd like to think of world history from the viewpoint of Kansai or Osaka. For example, from the viewpoint of Sakai, an international commercial city during the Age of Exploration, and from the viewpoint of the connection between the world and Osaka, which thrived on the cotton industry in the 1930s. By sharing our search results with the world through a dialogue with researchers in various fields of study, I want to demonstrate Osaka University's presence and emphasize the importance of Osaka and Japan. Also, in collaboration with major historians in Asia, I'd like to explore a world history in which Asia has taken the initiative.

OKADA In the mountainous areas in South-Eastern Asia where I’m interested in, people thought that it's not enough to make money by producing and selling goods. They think that maintaining their society in the setting they are in is also important. For example, slash-and-burn farming was regarded as a primitive farming method, but now it's reassessed as an environmentally-friendly farming method using natural resilience of forests. How have systems using environment and limited sources maintained society while changing under external influences? As for this, if we can provide the world with a viewpoint different from the conventional one, it will be used for research and education of sustainable development.

HIRANO Osaka University has a lot of scientific fields of research. Do you have any research challenges that you want to address in collaboration with researchers in those fields?

AKITA I'd like to think about the global history of infectious diseases. For example, how influenza and cholera spread and were treated. As another challenge, I want to examine climate change issues from a perspective of historical science. For example, it would be nice to think about the connection between the great climate change in the 17th century and various revolutions and riots in Europe with science researchers. That would become global history in a real sense.

OKADA For example, the demand for cinnamon, one of the forest products of Tai society, increased in the early modern period of Japan. One of the reasons for the increase was climate cooling. Various causes such as increased number of patients due to climate change and many medical books imported from China thanks to the improved economic power, medical treatment spread from cities to villages increased the demand for cinnamon. If we can do joint research on multiple factors related to history in cooperation with science researchers, I think historical science will make great progress.

HIRANO A different world is likely to open through interaction beyond fields of study. How will human society move from your global point of view? Economic movement spreads in a moment and the global society seems to be united without any limit. On the other hand, the world is never free from conflicts. Although diversity is important for the spiritually affluent development of human beings, there are high barriers because of diversity. I'm deeply concerned that humans will perish in the 21st century unless we live together harmoniously.

AKITA I think it's important to think about how to achieve multiculturalism by racking our brain. For example, Japan's relations with Korea and China are politically in a very difficult situation; however, if we think about the situation in the context of world history including that of East Asia, we can have a dialogue at an academic level. If we think not from bilateral historical awareness but from a global viewpoint, we can have objective discussions to find a solution. As shown in the attempt by “Open Regionalism” of the ASEAN in Southeast Asia and the Asia Pacific regions, I don't think multiculturalism is hard to achieve.

OKADA I think multiculturalism is hard to achieve and takes a long time, but if we look back on a very long history, it's quite natural that multiple races come together to make a society. I think the idea that one belongs to one race or nation has become common in the last one hundred years. A vertical connection like a nation was taken for granted, but we need to add horizontal connections to it. I think one of such horizontal connections is scholarship.

HIRANO Do you have something to say to Osaka University students?

OKADA This is often said, but it's important to just go outside. Exchanging with people from society with different senses of value helps you understand what your sense of value, or your assumptions, is, and you can talk about new things with knowledge about each others' differences. I want them to positively exchange with the outside world beyond their comfort zone.

AKITA I want them to go overseas, even if it's a short-term trip to neighboring places such as Taiwan or Korea. Unlike Japan's feeling of having no way out, young people in Korea and China are full of energy. Economy moves dynamically and competition is intense there. The point is, learning that in their neighborhood there is society different from the Japanese counterpart and putting themselves in a situation where they need to think of who they are is important. I'm stunned with changes in students who return home from study abroad.

HIRANO One cannot understand others if one cannot under who he or she is. I hope Osaka University students will cultivate a stance to see things from different perspectives just like seeing things from a viewpoint of global history. Thank you for your time today.

At Osaka University, the Graduate School of Letters takes the initiative in research and education of new world history beyond the conventional framework. We are building a close relationship through joint research with the University of London in the UK and major universities in Asia such as those in Korea and Singapore. Under such circumstances, I'm sure that the establishment of The Global History Research Division in the Institute for Academic Initiatives will further enhance the potential of global history research at Osaka University. It’s a great pleasure to build a new perspective of world history and shared it with the world in our efforts to realize the World Tekijuku. When I listened to the two of them, I was convinced negative aspects brought by diversity would be overcome and the future for mankind was bright.

Toshio HIRANO
A graduate of Osaka University's Faculty of Medicine in 1972, President HIRANO studied at NIH (U.S.) from 1973 through 1976. He became an assistant professor at Kumamoto University in 1980. He then became an assistant professor in 1984 and a professor in 1989 at Osaka University. Following that, he became the director of the Graduate School of Frontier Biosciences in 2004, and a director of the Graduate School of Medicine and the dean of the Faculty of Medicine in 2008. He assumed the the 17th presidency of Osaka University in August 2011. He served as Chairman for the Japan Society for Immunology from 2005 to 2006. He is also a member of the Council for Science, Technology and Innovation and The Science Council of Japan. He has a doctoral degree of medicine. His awards include the Sandoz Prize for Immunology, Osaka Science Prize, Academic Award of the Mochida Memorial Foundation, Medical Award, Fujiwara Prize, Crafoord Prize, Japan Prize, and Medal with Purple Ribbon by the Emperor of Japan.