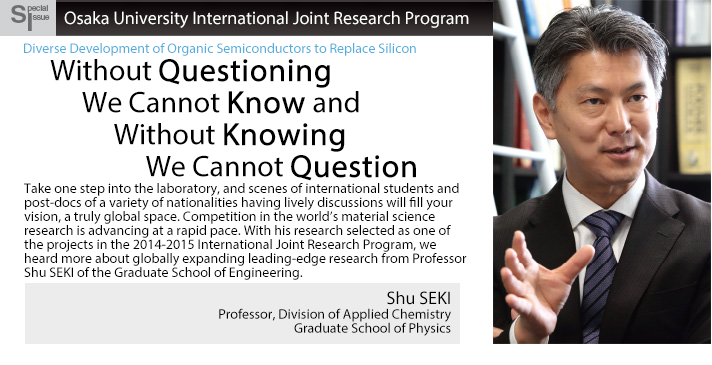 On April 28, 2014, Nature Communication reported on the fabrication of nanowires made of incredibly thin homogenous proteins. These nanowires were fabricated through ion beam radiation of protein membranes and causing cross-linking reactions along the particle trajectories called ion tracks. This groundbreaking, simple method has made it possible to fabricate particle threads with an aspect ratio (length-to-width ratio) of 1,000 or more . Nanowires planted on a substrate like hair form a structure with an extremely large surface area. This technique can be used for a drug delivery system by fixing enzymes on the surface of protein molecules. These nanowires were unexpectedly born from Professor Seki’s broad polymer material research.

Flexible and light-weight solar batteries can be made through an inexpensive method similar to using a printer. This method will greatly reduce the costs through to installation, leading to a dramatic increase in the practical value of solar power.

Silicon semiconductors have a nearly 70-year long history in a wide range of applications. On the other hand, “plastic that conducts electricity” based on a carbon skeleton has only been around for a short time. “I want to make this a revolutionary material to take the place of amorphous silicon,” said Professor Seki, who undertakes leading research in the field.

All around the world, dozens of the “newest” semiconductors are being announced every day. An accurate and speedy method to measure the characteristics of materials is necessary to maintain this pace. Professor Seki took on this challenge, and in 2013, he established technology to measure materials without contact. The characteristics of semiconductors are evaluated through the lightness of the movement of electrons and charge mobility. In the past, one needed weave electrons into the materials in order to measure them. Now, “we’ve eliminated any effects due to this weaving and measurement, and now are able to get a pure performance estimate of the materials. Not only that, by just applying the material to a substrate, we can measure it immediately, making our measurements 100 times faster than they were before.

Creating the Framework of "Making" and "Measuring" in the Same Lab

The USA, Japan, and China are all competing with each other in material development of organic semiconductors, and in a general sense, international collaborative research in this field is a given. However, there also exist ever-changing barriers. In research, having the materials themselves is a must. Through Professor Seki’s method, he can make quite a few measurements in one day, but there is a large time lag in terms of when these materials reach him. “In an environment where materials are being transported by airplane and sometimes customs can take a week or so, our development speed just can’t keep up. If we can repeat the process of ‘making’ and ‘measuring’ materials in the same laboratory, one can expect a dramatic improvement,” he said.

At Osaka University, the International Joint Research Promotion Program is being developed in order to expand international collaborative research with international researchers on a university-wide scale, which bears the fruits of dynamic globalism. At the Seki Laboratory, under the topic of “Quest of unusual electronic functionality of organic semiconductors by essential evaluation on material properties,” leading researchers from the United States have been invited from the 2014-2015 academic year. With this framework in place, error-free, accurate data can be produced at remarkable speeds. This layering will greatly improve the reliability of the research performed in Japan, as well as at Osaka University.

There are two sides to exchange involving sending and receiving human resources. ”If we send individual researchers overseas, they will be able to deeply experience the climate of their dispatch location, their behavioral patterns, and their logical composition. If we invite researchers, the entirety of the receiving laboratory can learn, and we can expect a ripple effect. That's why it's important to conduct world-class research based on internationally-acceptable, convincing logic while enjoying benefits from both sending and inviting researchers."

Abandoning as a Positive Decision

“Continuation is important for research, but in material development, the decision to abandon is also extremely important.” It’s tough to throw away research that one has worked on for many years, but if one is hung up on research that stands no chance, the research itself will collapse. “Materials and research results are born every day, but those that develop are few. It’s difficult to know when to give up, but you can’t put it off. It’s important to make the decision to give up accurately and quickly,” said Professor Seki.

But it is because one abandons research that one can give life to abandoned materials. As a new forest is reborn from old trees that fall, new materials, challenges, and research are given life from those thrown away. Professor Seki’s research on materials for organic thin-film solar cells has gotten over the hill, and his mission has nearly come to a close. “I’ve nearly reached the goal of the material, and now we can move on to developing technologies for practical use.”

Filming Chichibu with his Dream Camera

New challenges are born of Professor Seki’s motto of “Without knowing we cannot question, and without questioning we cannot know.” After applying high pressure, the material properties of known materials dramatically increases. It is thought that the cause of this is minor fluctuations in molecular structure and changes in intermolecular distance brought about by crushing these materials under tens of thousands of units of atmospheric pressure, pulling, and stretching them. Under high pressures is when Professor Seki’s electrode-less measurement methods come into play. If he researches the structure and behavior of the materials at this very moment, he can tie this to new molecular designs of new organic semiconductors. Conventional semiconductors were produced using amorphous silicon, or existing materials. On the contrary, organic semiconductors are produced by designing the molecular structure of organic material, which opens the door to more possibilities.

Someday, “I’d like to film the mountains of Okuchichibu, which I have fond memories of climbing for the first time as a student, with a camera composed of image sensors made from all-plastic semiconductors.”

A 1991 graduate of the Faculty of Engineering at The University of Tokyo, he completed the graduate program at the Graduate School of Engineering at The University of Tokyo in 1993. In that same year, he began a research assistant at the Argonne National Laboratory in the United States, and in 1995, he started work as an assistant at the Institute of Scientific and Industrial Research at Osaka University.

In 2007, he became an associate professor at the Division of Applied Chemistry at the Graduate School of Engineering, Osaka University, and a professor in 2009. He obtained his doctorate in Engineering at Osaka University in 2001, and his field of study is polymer properties. He specializes in reactions and properties of polymer materials with conjugated skeletons, physicochemical reactions by ion beams, tracking of physicochemical reactions by the electron pulse radiolysis method, super microfabrication by electron beam, taking part in development in multiple fields that will connect to everyday life, such as “new semiconductor materials that will replace silicon.” He received the Society of Polymer Science, Japan Hitachi Chemical Award in 2006 and the Japan Society of Applied Physics Award in 2000. His hobby is photography, and he relaxes by mountain climbing and taking photos of mountains.