”Find your passion, adapt, and aim to be your best”

Prof. Daron Standley leads a bioinformatics laboratory at the Research Institute for Microbial Diseases (RIMD). After receiving his Ph.D., he worked at an American startup company for several years before coming to Osaka University to work at the Institute for Protein Research for five years. He then moved to the Immunology Frontier Research Institute (IFReC) in 2008 and became a full professor at RIMD in 2016.

When he was young, Prof. Standley was not interested in studying until he became 19 years old when he realized that he needed a proper education for his future. He then decided to attend Seattle Central Community College with a desire to become an artist, but after finding little success in the field, he looked for alternatives and discovered his passion for physics. He received his associate degree after two years and spent another four years at Harvey Mudd College re-learning undergraduate physics. In college, he was active in an upward-bound program, tutoring young people who came from underprivileged families, and was successful in helping all three students studying under him to get into the University of California system. Afterward, he got into a chemistry Ph.D. program at Columbia and has been using his physics and chemistry knowledge, combined with his programming skills, to solve problems in life science.

A multi-dimensional approach to immunology 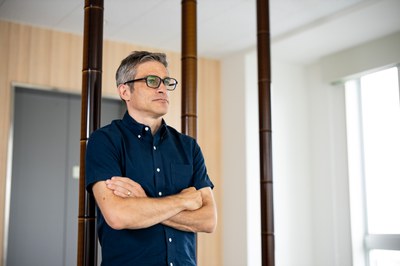 One exception to this “real-world” approach is his work on the comparative analysis of immune repertoires (B-cell and T-cell receptors; BCRs and TCRs, respectively). Prof. Standley's team started this work even before immunologists at his institute showed any interest, achieving excellent results at the second Antibody Modeling Assessment (AMA) contest in 2014 and gaining popularity in the field. He then co-founded a spin-off company that uses this technology, left the management of the company to a former group member, and has been concentrating on his research and collaborating with many research groups ever since. His lab developed a method to cluster TCRs or BCRs based on their shapes and sequences, which can then be used to identify disease-specific receptors. A breakthrough using this method came unexpectedly when he analyzed the BCRs of recovered COVID-19 patients and could identify unique patterns of the antigen-binding sites of neutralizing SARS-CoV-2 antibodies. Ultimately, such an approach can be used to find the epitope(s) of the viral protein and help guide vaccine development.

Globalization and the working environment at OU

Prof. Standley mentioned that OU's globalization and diversity efforts have been progressing at a slower pace than he had expected. Although the university has been accepting many international students and researchers, these young people often find it difficult to integrate into and be accepted by Japanese society. Nevertheless, there are support groups in Japan and at OU that can assist in this matter. He recalled having a crisis in his first six months of living in Japan and was saved to a large extent by the support network at OU that introduced him to the hiking and judo clubs and volunteer activities that kept him active and healthy during that crucial period, both physically and mentally.

Compared to his experience working in the US, Prof. Standley personally believes that OU has provided him with an ideal working environment. Even before becoming a principal investigator (PI), he was given the freedom to work and be creative in his research by his supervisor. At the same time, it is clear to him that some international students and researchers are not thriving in typical Japanese laboratories. He believes that the university needs to try to identify what factors allow international students and researchers to thrive in the research environment at OU. Prospective students or researchers from overseas should expect to align their interests with those of the host lab, and it is critical to find out what the PI expects from them to avoid any trouble that may arise from misunderstandings and unrealistic expectations. In this regard, it is a great idea to visit the lab in question before making a commitment.