For You
For You
Click for more
Skip to main contentSkip to navigationSkip to footer
Live Locally, ”Grow Globally”

“Knowing different cultures and languages is a great advantage;

without a bridge, no business advances”

Ms. Wei Li completed the doctoral course at Osaka University’s Gradulate School of Language and Culture in March 2002. Immediately following her graduation, she took a position at Happy World Inc., and is now working at its Shanghai branch (All Next Inc.). It had been her dream to work as a bridge connecting China and Japan through cultural and economic exchange, and now she’s living it.

Ms. Li works in a medium-scale general trading company engaged in business with China and the United States. The company deals with travel arrangements for people from China to visit Japan, including medical tourism and business missions. In addition, the company also owns a 165-acre coffee farm in the Hawaiian island, and its business is now expanding against the Chinese market by selling coffee beans as well as trees and plants.

Her research theme in graduate school was on the difference in people’s behavior from the perspective of respective cultural backgrounds among Japan, China, and South Korea. What she studied greatly aids her in her business today. Moreover, her proficiency in the Japanese language as well as her deep understanding of the gaps between various cultures allow her to perform more effective and efficient operation and management, which is key to her business success. 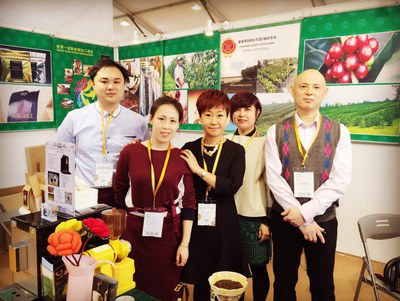 Making every experience a learning opportunity

As a student at the university, she was proactive in communicating and interacting  with society, working as an interpreter, a translator, and a tour guide in order to accumulate knowledge and experience. Through such communication, she was able to build relationships with other people and acquire knowledge that was new to her, all of which prepared her to start her career with next to no difficulty.

Ms. Li also frequented the library while she was attending university. Her ability to collect information via literature has also served her well in her current business endeavors.

Knowledge gained at OU continues to propel her forward

Engaging in business with China, Japan and the United States makes her feel that she is making the absolute most of what she learned at Osaka University. By acquiring knowledge about the economy and studying different cultures, she will make every last effort to make even further progress and contribute to her business field.