On Friday, December 20, 2019, Osaka University received the China-Japan Education Exchange Contribution Award from the Consulate-General of the People’s Republic of China in Osaka.

This marks the third time the university has received this award following its reception in January and December of 2018. The university was commended for its long-time efforts to promote and develop friendly relations with China, which includes the university’s sponsorship of the 6th China-Japan Conference on Education Exchange & Cooperation in Osaka on Wednesday, November 27 and Thursday, November 28, 2019.

Upon receiving the award, Executive Assistant to the President ISHIKAWA Mayumi expressed her appreciation for support from the Education Office of the Consulate-General of the People’s Republic of China in sending and accepting exchange students and in active exchange in the 6th China-Japan Conference on Education Exchange & Cooperation. 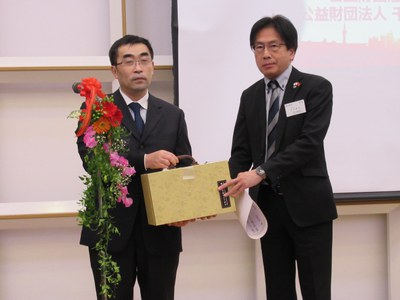 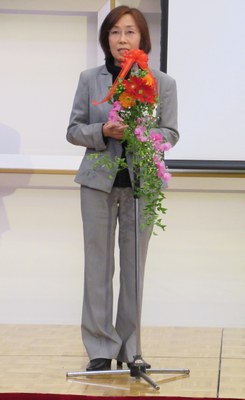 On Thursday, November 14 and Friday, November 15, 2019, Osaka University and University of California, Davis (UCD) held a joint symposium at OU. 9 researchers were in attendance from UCD, including Professor R. L. Rodriguez and Professor Tonya Kuhl. This symposium was held in order to develop the agreement on strengthening bilateral cooperation through close communication and opinion exchange, which was confirmed during the talk between Executive Vice President Kawahara and UCD Vice Provost and Associate Chancellor Joanna Regulska on his visit to UCD in June of 2019.

On November 14, a joint bioengineering/biochemical engineering joint symposium was held at Hankyu Railways-Sanwa Bank Hall at Icho Kaikan, where presentations were given by Professor FUKUSAKI Eiichiro (Graduate School of Engineering), Professor MURANAKA Toshiya (Graduate School of Engineering), Professor UMAKOSHI Hiroshi (Graduate School of Engineering Science), and Professor KURISU Genji (Institute for Protein Research). In addition, researchers from Kirin Holdings Company, Limited, which supports students exchange between the two universities, and Sony Computer Science Laboratories, Inc. also took the stage during the symposium. Kirin Holdings intends to provide assistance grants of some 2.5 million yen to the student exchange program in the field of plant biotechnology under the academic exchange agreement signed by the two universities.

On November 15, sectional meetings were held in bioengineering and biochemical engineering. On the same day, the Graduate School of Engineering Science concluded an inter-faculty agreement with UC Davis College of Engineering and discussed specific future endeavors of the two schools. After the sectional meetings, researchers from UCD and related corporations got together with international students for a cooking contest at the International Center for Biotechnology, deepening exchange between attendees. 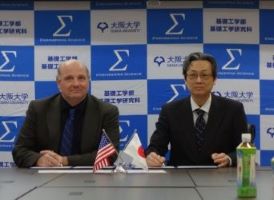 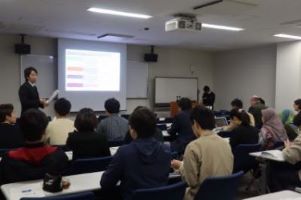 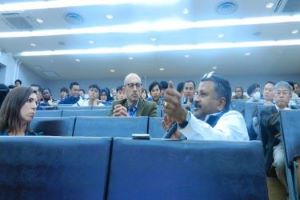 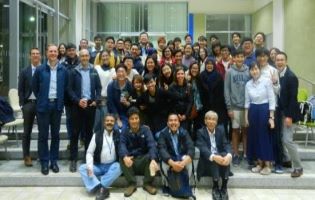 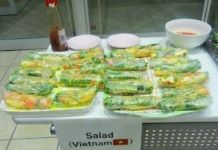 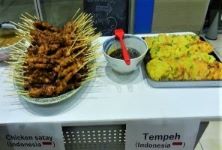 Prior to the signing ceremony, the group toured the Center for Information and Neural Networks (CiNet), where CiNet Director YANAGIDA Toshio gave an overview of the center. Later, Vice Director TAGUCHI Takahisa showed the group around the facilities, where they got a first-hand look at the cutting-edge research performed at Osaka University. President Ono and Vice-Provost Chandrashekaran had a number of questions regarding research at the center, and later, the group were driven around for a tour of the Suita Campus.

Also in attendance were Mr. Chenier LA SALLE (Consul, Consulate of Canada in Nagoya) and HIGUCHI Shinichi (Head, Office for Particle and Nuclear Research Promotion, Basic Research Promotion Division, Research Promotion Bureau, Ministry of Education, Culture, Sports, Science and Technology), both of whom delivered a congratulatory address for the signing in hopes that it will lead to further strengthening of the relationship between these two nations.

This agreement aims to develop this bilateral exchange into a new phase based on previous active exchange in the field of nuclear medicine and promote exchange between researchers and students as well through more comprehensive and strategic collaboration.

Director Nakano spoke about the significance and future prospects of this strategic agreement between the two universities, reconfirming the expansive collaborative possibilities in a variety of different fields.

There’s no doubt that the collaborative efforts between the two universities to contribute to the solution of worldwide social issues based on the bonds of trust between President Nishio and President Ono will continue to strengthen moving forward.

A television reporter from NHK covered these collaboration efforts in a story featured on the news the very same day. 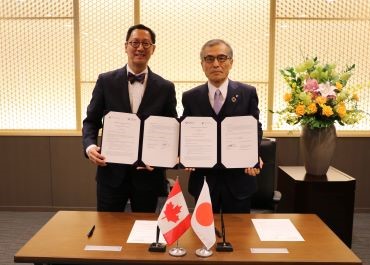 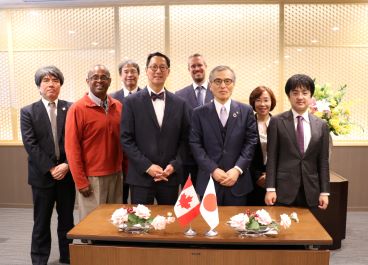 Over the course of the two-day conference, presidents and vice presidents in attendance held discussions on the role of HeKKSaGOn and signed a joint statement on the future development of the consortium. 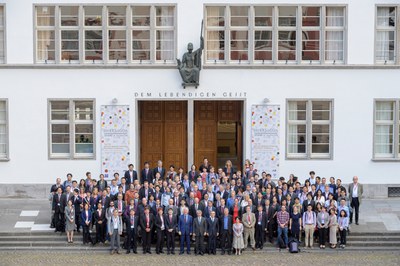 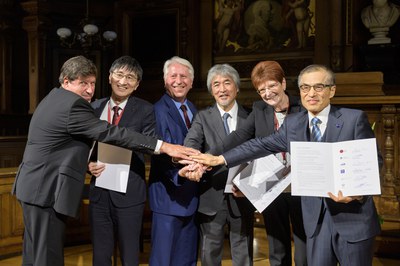 In the presence of 21 attendees, President Nishio, Executive Vice President Kawahara, Provost Arthur, and Vice-Provost Brewer signed the agreement, confirming the formidable connection shared by the two universities in their efforts toward their mutual goal of solving global social challenges.

After the signing, Executive Vice President Kawahara explained the background of the agreement and the current situation of the universities’ collaborative efforts, and later, representatives talked about the progress of collaborative activity in their respective fields.

The two universities then confirmed a collaborative roadmap, which involves verification of results of current and upcoming projects in Osaka University’s 90 th Anniversary Commemorative Project scheduled in 2021.

A television reporter from NHK covered collaborative efforts between the two universities, as well as the Joint Project to research dementia headed by Professor Iso of the Graduate School of Medicine. This story was featured on the news the very same day. 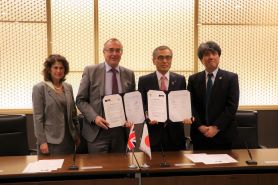 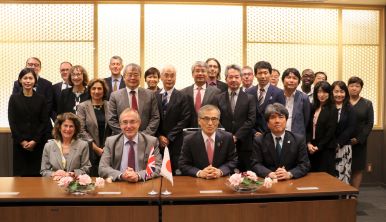 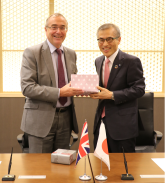 On Wednesday, July 24, 2019, a group of 95 individuals from Peking University (including students, a group leader, and a conductor) visited Osaka University. This group was invited by the Japan-China Friendship Center as part of the Japan-China International Solidarity Project on Afforestation and Tree-planting" sponsored by the Ministry of Foreign Affairs of Japan. This project aims to promote a multifaceted understanding of Japan in the Chinese population as well as friendship between young people in Japan and China through afforestation activity, inspection tours of disaster prevention/environmental protection facilities, and visits to universities.

Next, after an introduction to Osaka University by Center for Global Initiatives Assistant Professor Li Ming and a video in English on JWRI, Assistant Director of JWRI FUJII Hidetoshi delivered an academic lecture entitled “Welding Steel Without Melting It.” He spoke about “welding regardless of the carbon content (friction stir welding)” (patented), which was not possible by conventional technologies. Professor Fujii's lecture was simultaneously translated by JWRI Assistant Professor Liu Huihong.

Students from Peking University offered their impressions, saying “I was able to experience a classroom environment at a Japanese university” and “Hearing about cutting-edge research was really motivating for me.”

In the second half of the event, students engaged in group work led by Director Komizo. During this group work, lively discussions were held in earnest between young people from Japan and China on topics such as Japan-China relations and differences in university life and finding employment between Japan and China. Through these discussions, students from Peking University were able to gain an understanding of the latest research being performed in Japan, and young people from Japan and China were able to deepen their friendship.

The students from Peking University had positive reactions to the program, such as “The Japanese and Chinese students were able to learn about each other’s ways of thinking and feeling” and “Even though our countries are different, we shared many similarities as students and also made many discoveries about ourselves.”

TORIUMI Atsushi (2nd year, master’s program, Department of Physics, Graduate School of Science) of Osaka University, which hosted the event, said, “It was such a valuable experience to be able to interact with students from Peking University, one of China’s best universities. Personal exchange and exchange through activities related to Japanese animation and manga are flourishing among young people. So we the young people are sure to play a central role in nation-building and creating good bilateral relationships. This was a fruitful meeting with very constructive discussions."

Finally, JWRI Director TANAKA added some words of encouragement, saying, “I hope you all will consider studying abroad at Osaka University, one of Japan’s leading research universities, particularly at JWRI,” after which attendees gathered for a group photo to close the event. 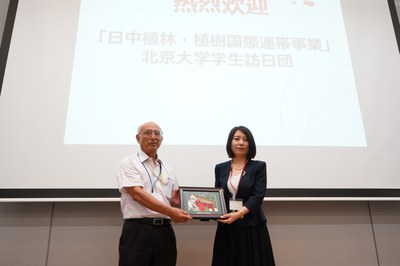 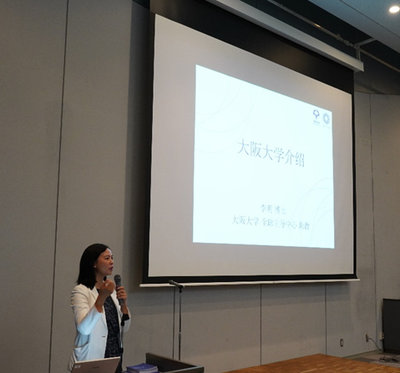 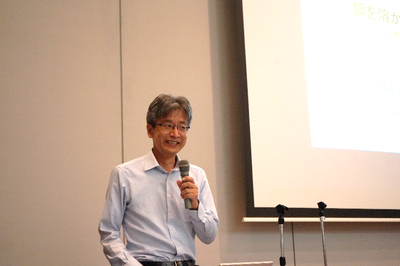 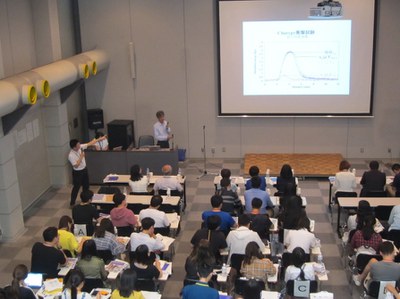 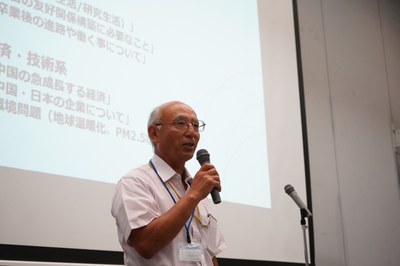 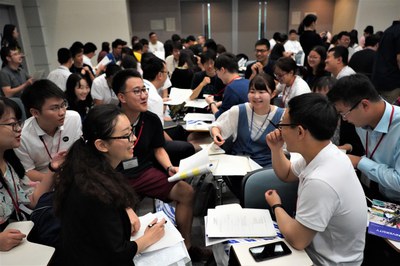 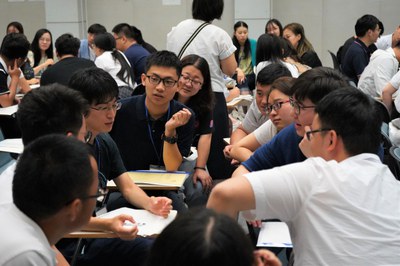 Some scenes from the group work session 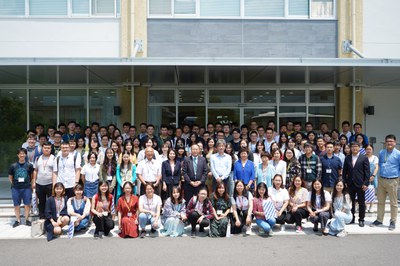 On Thursday, March 14 and Friday, March 15, 2019, Osaka University and University of California, San Diego (USCD) held a joint workshop at USCD in the field of information science, with 11 faculty and staff members from Osaka University, including Cybermedia Center Director SHIMOJO Shinji, Dean of the Graduate School of Information Science and Technology Prof. FUJIWARA Toru, and Institute for Datability Science Prof. NAGAHARA Hajime, and 30 individuals from UCSD, including Vice President Sandra Brown and Senior Advisor Chaitan Baru, were in attendance.

After concluding an Inter-Faculty Agreement between UCSD and the Graduate School of Information Science and Technology and the Cybermedia Center, Osaka University and UCSD concluded and Inter-University Agreement in 2017, continuing exchange primarily in the field of information science. In order to further strengthen interaction in the field of information science, the workshop was divided into 8 topics with the aim of research matching for both universities. Intensive research presentations and discussions were held on: Data Science, Information Security, HPC/Networking, Graph/Database, Bioinformatics/Bio-image Informatics/Genomics, Data Science/HPC, Visualization/AR/VR, and IoT/CPS.

A number of new promising areas for future collaboration were discovered at this workshop, making further development of academic exchange between these two schools highly anticipated.

A scene from the workshop

On Tuesday, March 12 and Wednesday, March 13, the “Data Workshop Osaka-Groningen” was held at Osaka University together with the University of Groningen, one of OU’s Global Knowledge Partners. Ten individuals were in attendance from Osaka University, including Executive Vice President YAGI Yasushi, Executive Vice President KAWAHARA Genta, and Cybermedia Center Director SHIMOJO Shinji, while 8 individuals were in attendance from the University of Groningen, including Director of the Center for Information Technology Ronald Stolk and Dean of Faculty Campus Fryslân Andrej Zwitter.

The focus of this workshop was the information sector. On day 1 of the event, a plenary session was held to introduce the education and research trends at each of the two university: Initiative for Life Design Innovation at OU and an interdisciplinary school and graduate schools on the University of Groningen’s Campus Fryslân, which were newly established to coop with global issues.

On day 2, programs in the field of information science were introduced and concrete discussions were held concerning further invigoration of interaction between students.

This workshop further deepened the friendship between the two schools and served as an important foundation for the strengthening of substantial collaboration. Further academic exchange between these two schools is anticipated in the future.

This event served as part of the Japan International Cooperation Center’s 2018-2019 KAKEHASHI Project. KAWAHARA Genta (Executive Vice President of Global Engagement and Student Support) greeting attendees and, following this, Director Arikawa of the Center for International Education and Exchange gave an introduction to the university.

Following the group discussion, Professor Arikawa gave a closing greeting, ending the event. This event served as a valuable experience for students from both countries, deepening friendships between Japanese and Canadian students. In March, students from OU will visit Canada to further deepen their exchange. 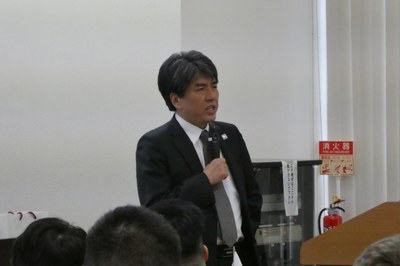 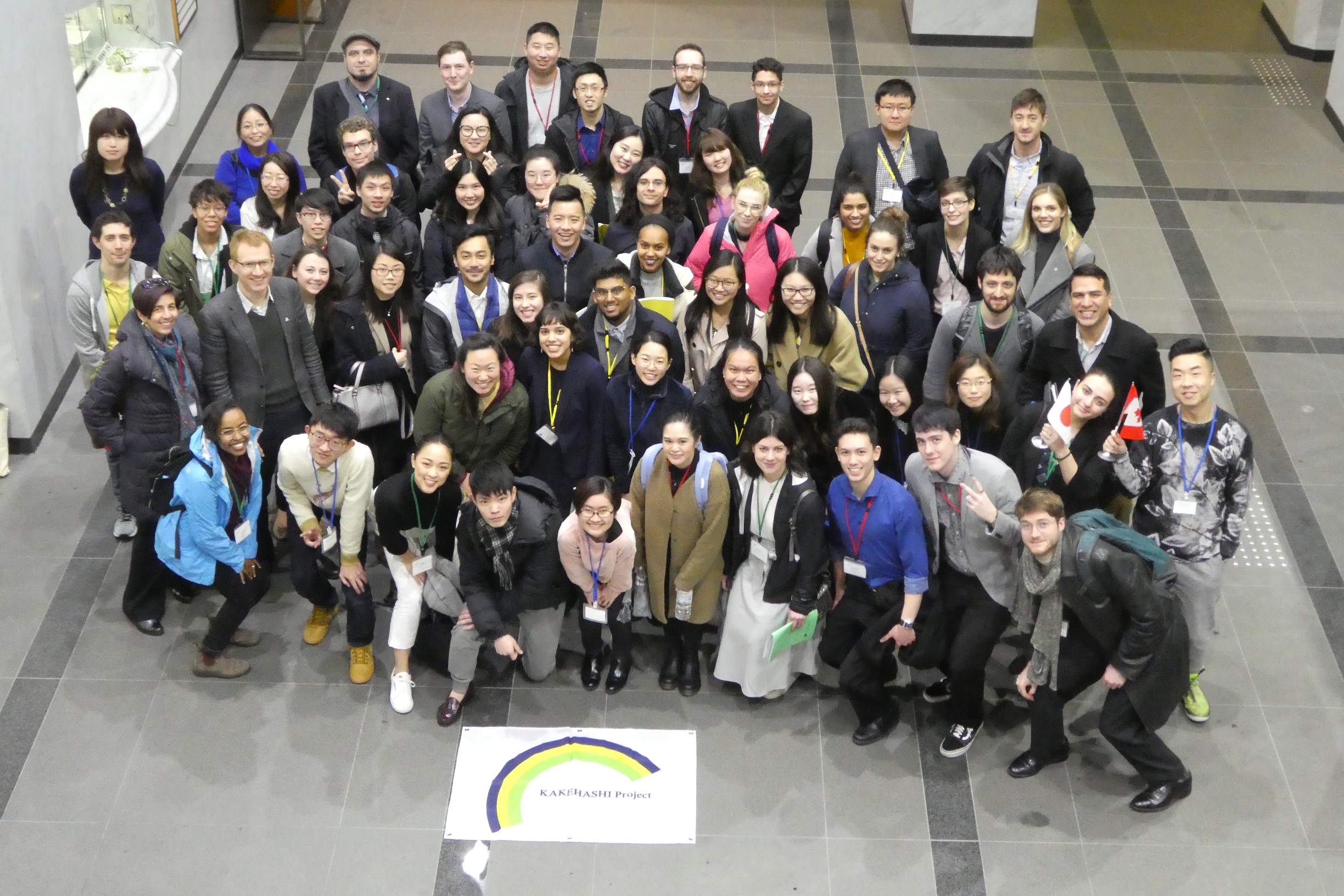