On December 22, 2013, a social gathering for OU graduates living in Vietnam was held at Daewoo Hotel in Hanoi and President Hirano spoke on the current situation at Osaka University. Sixty-five persons participated in this socializing which followed. Many of them were Vietnames who had studied at OU, but 12 Japanese living there on business also participated. They enjoyed talking with President Hirano and meeting with friends in a friendly atmosphere. The project to establish an Osaka University Alumni Association in Vietnam was getting off to a good start. This will promote the presence of Osaka University in Vietnam.

6 universities in Japan and Vietnam Symposium in Hanoi, Vietnam

On December 21, 2013, Kobe University, Kyoto University, Osaka University held the Japan and Vietnam Six Universities Symposium in Hanoi, Vietnam under the sponsorship of The Senshu Ikeda Bank, Ltd. Following  the Kansai Revitalization Symposium in June 2010 and the Suzhou China Symposium in September 2012, this symposium was held in Vietnam which was celebrating the 40th anniversary of the establishment of diplomatic relations between Japan and Vietnam.
Under the theme of "What are internationally-minded human resources? -- Thinking about them from the Kansai region and Vietnam", universities made presentations on the globalization of university education and efforts in nurturing human resources. President Hirano delivered a speech under the title of "Cultivating human resources carving out the new age" and also participated in a panel discussion with HATTORI Moritaka, adviser, The Senshu Ikeda Bank, Ltd.
Researchers at 6 universities in Japan and Vietnam made presentations under the theme of "Challenges in sustainable development in Japan and Vietnam" and Dr. IKE, adviser to the director, The Graduate School of Engineering, made a presentation.
The symposium with more than 200 participants ended with great success.

On December 13, 2013, Trustee and Vice President OKAMURA attended the 2nd Japan-Indonesia Rectors' Conference held at Gadjah Mada University in Yogyakarta. This meeting aimed to build broad and comprehensive cooperation by networking inter-university exchange between Japan and Indonesia. The first meeting was held last year at Nagoya University. Some 100 attended this year's meeting entitled "Partnership in Bridging the Theory into Practices" .
The meeting opened with greetings from national representatives and guests. Following that, the director of a energy-related national company in Indonesia, Pertamina, delivered the keynote speech. Next, two group sessions were held. In the session "Joint Student Programs between Japanese and Indonesian Universities," a scholarship program from Direktorat Jenderal Pendidikan Tinggi [Indonesian High Education Directorate] (Dikti) and efforts by the ASEAN University Network/Southeast Asia Engineering Education Development Network (AUN/SEED-Net) were introduced. Presentations about the universities' joint programs were also made.
At the general meeting, based on the report from the preceding group session, the role of this conference for further promotion of bilateral cooperation in education and research was discussed and the value of such conference was confirmed.

On Sunday, December 8, 2013, the 33rd board meeting and the 19th annual meeting of  AEARU were held at National Tsing Hua University in Taiwan. Osaka University serves as a trustee. President Toshio HIRANO and Vice President ABE Kenzo attended. At the board meeting, President Hirano announced his intention of holding the Student Summer Camp at Osaka University next academic year and it was approved. In the annual meeting, presentations were made by presidents of the member universities. President Hirano talked about Osaka University's growth strategy and participating universities asked eagerly.
Prior to these meetings, the president forum sponsored by AEARU and League of European Research Universities (LERU) was held on previous day.
In the forum, regarding advanced research and overseas development of member universities, lively discussions were held and they agreed with promoting cooperation in both consortiums.

On Wednesday, November 27 and Monday, December 2, workshops were held in order to deepen office workers' understanding of different cultures and improve their English ability necessary for dealing with international researchers and students in their different positions. Twenty-three staff members participated in two workshops: " Intercultural Communication Seminar " and " Mindsets for Speaking English ."
On November 27,  following a greeting from Trustee and Vice president OKAMURA, under the direction of through a lecture from YOSHINAKA Masakuni, ALC Education, Inc., through discussion and other methods, participants learned about differences in what different cultures consider important and understanding cultural differences. On December 2, in the workshop "Mindset for speaking English" by MATSUI Takako, instructor, ALC Education, Inc., participants studied and practiced vocabulary , grammar, and composition, items useful in their daily work.
Participants stated that they were pleased with the workshops which provided specific information useful for the situations that arise in their jobs.

For more information on this conference and to view photos, go here .

The 16th Osaka University-Shanghai Jiao Tong University Academic Exchange Seminar was held from October 22 through October 24, 2013. Academic exchange seminars by these two universities have been alternately held since 1995 in accordance to their bilateral academic exchange agreement. The seminar started with the one on welding material engineering. The areas covered by this seminar have expanded to 7 areas: materials, global architecture, information, physics, optics, environmental innovation, and history.
This year, seminars on 5 areas: materials, global architecture, information, environmental innovation, and history were held at Osaka University. 38 people from Osaka University and 19 from Shanghai Jiao Tong University participated in the seminars.
On Tuesday, October 22, a reception was held. Other than seminar participants, Trustee and Vice President OKAMURA, Vice President ABE, Graduate School of Engineering Dean KAKESHITA, and International Exchange Office staff attended. From Shanghai Jiao Tong University, other than Vice President Huang Zhen, 21 people attended, bringing the total to some 60 people.
On Wednesday, October 23, five section meetings were held on the Suita and Toyonaka campuses and presentations on research results, discussions, and opinion exchange were held.
Next time, Shanghai Jiao Tong University will take charge of  this seminar to be held in Shanghai.

From Saturday, October 12, 2013, through Monday October 14, the 11th senior staff meeting of Association of Pacific Rim Universities ( APRU ) was held at Australian National University. Osaka University is a member and council member of APRU.
Including Trustee and Vice President Yasuyuki OKAMURA (Director of International & PR Strategies, Society-University Collaboration) and Mayumi ISHIKAWA (Professor, Institute of Academic Initiatives) and International Exchange Office staff members, 45 people from some 30 universities attended this meeting.
Under the theme of "A Framework for Implementation," participants mainly discussed the current situation and further development of strategic framework of APRU. In a section meeting, under the theme of "Creating Asia-Pacific Global Leaders," participants talked about the role of female leaders in APRU member universities and reviewed existing APRU programs.
The next senior staff meeting will be held at University of Indonesia in November 2014.

The 3rd Presidents' Conference of the HeKKSaGOn University Conference took place in Germany on September 12 and 13, 2013.

For more information on this conference and to view photos, go here .

The English Communication Workshop was held over the two Thursdays of September 19 and September 26, 2013.

This workshop was called Presentations in English Workshop through last year; the current name, as you can see above, is now English Communication Workshop. The purpose of this workshop is and has been to provide office workers, whose English language skills might be termed "entry-level," with basic but effective English communication skills.  Upon completion, the office worker, relative to their position, should be able to explain or give advice in English.

Participants stated that they were pleased with the content and pace of the workshop, with many of them saying it was very productive and they'd like to participate again next time.

32nd board meeting of The Association of East Asian Research Universities

On Friday, May 10, 2013 , Osaka University participated in the 32nd board meeting of the Association of East Asian Research Universities (AEARU) at Tohoku University. President HIRANO and Trustee ABE, who is in charge of international exchange at OU, attended the meeting. The seven members of AEARU discussed future activities. They closed the meeting after promising to see one another at the next board meeting and annual general assembly to be held next year at National Tsing Hua University in Taiwan.

On Thursday, December 20, 2012 , the Workshop "Challenges associated with University Internationalization" was held at the Faculty of Medicine's Icho Hall . This workshop was held in order to clarify areas for improvement in office routine through lectures and group discussion. International students and 17 staff members from divisions concerned with international exchange programs participated in this workshop.

After that, each group presented the outcome of their discussion. The workshop closed with comments by HIRATA Kimiaki , Head, International Student Affairs Division.

On Monday, September 24, 2012 , in order to improve office workers' English speaking skills, the 5th Presentations in English Workshop was held for beginners in the IC Hall. Thirty-three persons participated in the workshop -- 22 from Osaka University, and 9 from member universities of the Osaka-Kobe University Network for Internationalization (Kansai University, Kwansei Gakuin University, Kobe University, and Osaka University). In the workshop, following the greetings by MUKAI Hiroshi, Chief, International Affairs Division, Mr. Robert Bryan Perkins delivered a lecture and conducted a group workshop. The workshop closed with closing remarks by Director and Vice president Akira TAKAHASHI.

Participants stated that they were pleased with the content and pace of the workshop, with many of them saying it was very productive and they'd like to participate again next time. 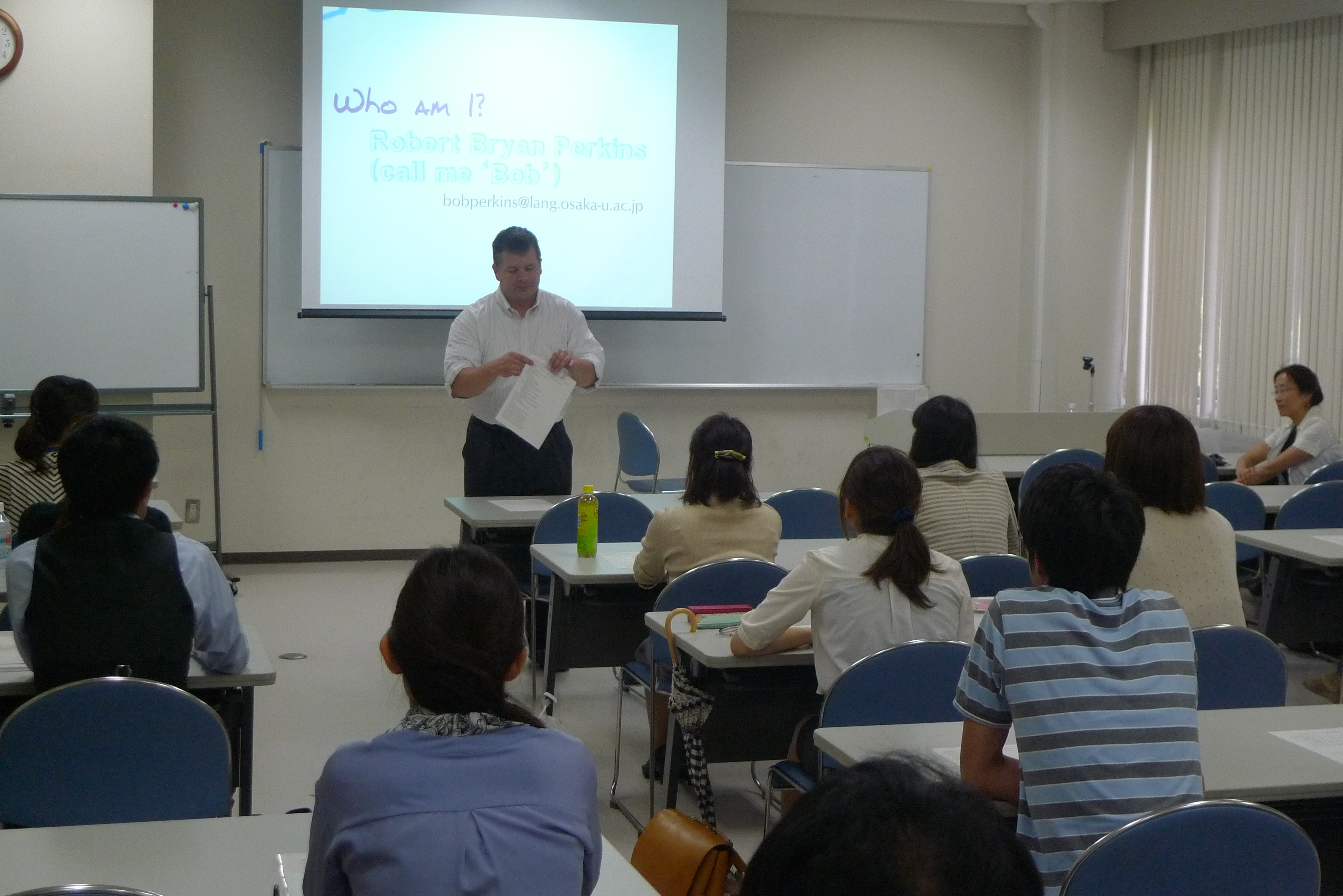