Rules and regulations for transportation and biking

Transportation to and from campus

Osaka University encourages its students to walk or use public transportation to get to and from its campus. Basically, students are not permitted to commute to OU campuses by car, motorcycle, or motor scooters. Individuals who have to commute by one of the above due to physical disabilities and/or other reasons are required to obtain a permit from the university. Commuting by vehicle without permission and/or parking on roads near the university are violations and unbecoming of OU students.

Students are strongly requested to always obey all traffic regulations and behave in a responsible and mature manner. Students commuting by bicycle are expected to obey the following rules.

Be considerate of pedestrians and local people. Under the Road Traffic Law, bicycles are defined as a vehicle. Bicyclists must follow rules and malicious violators and individuals who caused fatal accidents in violation of these rules will be strictly punished. Keep in mind that bicycles can be dangerous to pedestrians.

The following are rules for safe bicycling on and around the OU campus. Cyclists should be aware that they are driving a vehicle so as to not cause annoyance to members of the general public living near OU as well as persons on campus.

The new Minoh campus and its surrounding area

Bicycle parking is not available on the new Minoh Campus. Please commute to the school on foot and/or via public transportation.

For those of you who commute by bicycle, Minoh Semba Daiichi Bicycle Parking (paid parking) opened under the pedestrian deck on May 1, 2021.

It is illegal to park anywhere around or near the campus. Cyclists must bike safely and follow traffic rules so as not to cause a nuisance to local residents. 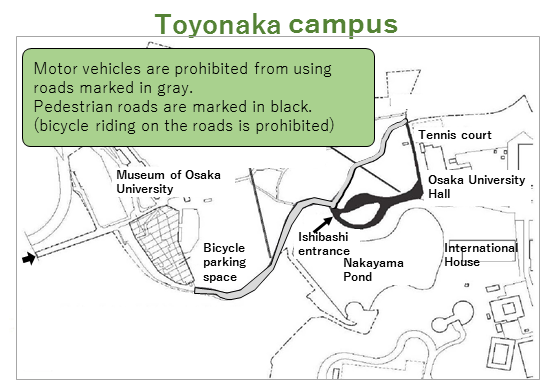