Although officially founded in 1931 as Japan's 6th imperial university, you may be interested to learn that Osaka University's roots reach back to1838 and Tekijuku, a private "place of learning" founded by OGATA Koan. As the author SHIBA Ryotaro wrote at the beginning of his historical novel Kashin, Teijuku, a private “place of learning” in Semba, Osaka, for Western medicine was the predecessor of Osaka University. Thanks to Tekijuku, the passion for scholarship of Osaka citizens and the spirit of “For people, for society, and for benevolence,” were passed on to Osaka University. 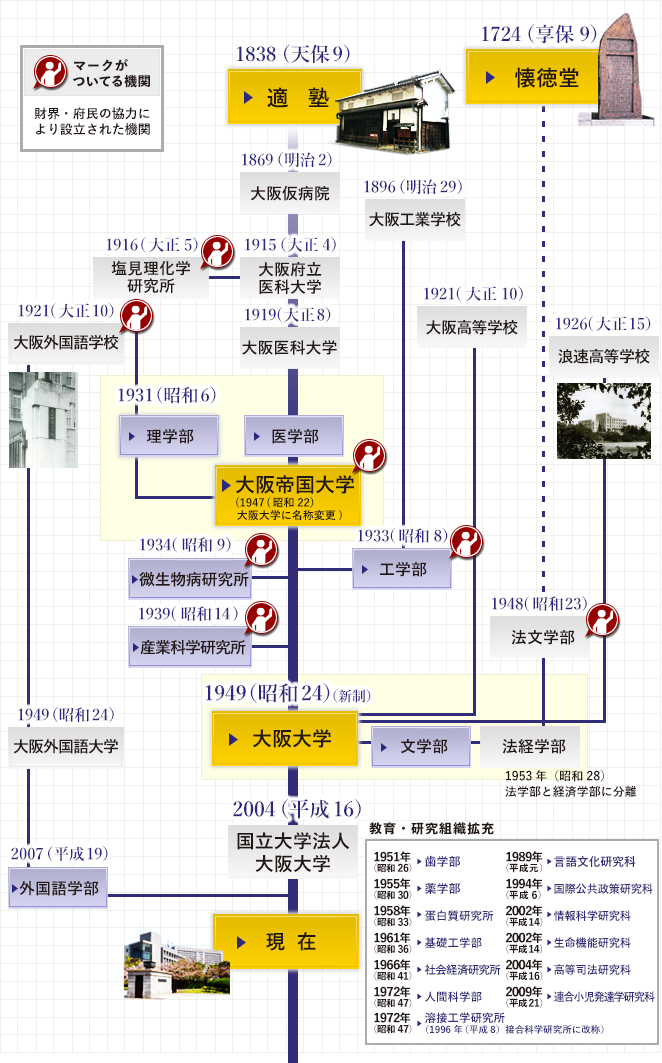 Expansion of educational and research organizations at the university

1966 Institute of Social and Economic Research

1989 Graduate School of Language and Culture

The founding of Tekijuku and what would eventually become Osaka University

While Osaka University was founded in 1931, its origins reach back to Tekijuku, a private place of learning founded by OGATA Koan.

OGATA Koan was a competent scholar of Western medicine which he had studied in Edo and Nagasaki. Although he hailed from Ashimori-han, Bicchu (currently Ashimori, Kita-ku, Okayama), in 1838 he came to Kawara-machi, Osaka, and built a private school and clinic called Tekijuku.
Seven years later, he moved Tekijuku to Kasho-machi (currently, 3 Kitahama, Chuo-ku, Osaka) where much of the original school building still remains. For the next 24 years, Tekijuku was a center for vaccination research and cholera treatment. Koan established "Jotokan" in 1846, which became the first smallpox vaccination institution recognized by the Edo government in 1858. 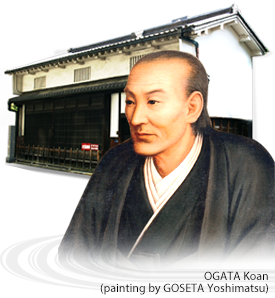 Among the some 1,000 students who studied at Tekijuku were FUKUZAWA Yukichi, OMURA Masujiro, NAGAYO Sensai, OTORI Keisuke, SANO Tsunetami, and HASHIMOTO Sanai. Tekijuku nurtured graduates who blazed paths in the early Meiji period for a modern Japan.

1931 The birth of Osaka Imperial University, the 6th imperial university 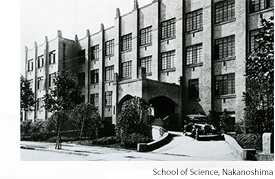 In 1931, Osaka Prefectural Medical School officially became Osaka Imperial University with two schools -- the School of Medicine and the School of Science.

In accordance with national policies of that time, several imperial universities were established throughout Japan as the nation's highest education and research institutes. Thanks to enthusiastic activities by Osaka Prefectural Medical School President KUSUMOTO Chozaburo (2nd President of Osaka Imperial University) and the then Osaka governor SHIBATA Zenzaburo coupled with the support of many citizens, the calls to build a comprehensive university in Osaka (which was larger than Tokyo), were finally answered in 1931. Behind the birth of Osaka Imperial University, one must also credit the efforts by NISHIO Ikuji, the administrative official of Osaka Medical School. Thus, the imperial university that citizens in Osaka had longed for was finally established. In this way, Osaka Imperial University came into being through the efforts of citizens.

The imperial university's first president was a well-known physicist, NAGAOKA Hantaro. Looking back at that time, he said, "I made every possible effort to gather outstanding faculty members in order to make Osaka University the best university in Japan. I worked on fostering the momentum toward building a university focusing on research, especially research into industrial science." He also stressed his motto “Do not imitate others. Do things your own way.”

Later the Research Institute for Microbial Diseases and the Institute of Scientific and Industrial Research were established thanks to generous grants from private donors. As the School of Engineering, the former Osaka Technical School made a great contribution to the development of Osaka which flourished as an industrial city and was nicknamed "Manchester of the Orient." Osaka Technical School had a department of brewage, the only one in Japan. Children from sake and soy sauce brewers studied there, contributing to the modernization of brewing in Japan.

Kaitokudo
Kaitokudo was established as a place of learning in 1724 for merchants in Amagasaki-cho in Osaka (currently Imabashi, Chuo-ku). Kaitokudo was a place of learning for many citizens, both young and old. Thanks to a wide variety of lessons such as Han [Chinese] learning, Japanese studies, prose and poetry, as well as to its less rigid environment that allowed students to be absent for reasons such as business, Kaitokudo prospered for some 150 years as a center of learning in western Japan. The appeal of Kaitokudo rested in being a place of learning where anyone, both employers and employees, could study advanced scholarship. Unfortunately, during WWII, Kaitokudo was destroyed.
Following the war and the addition of the School of Law and Letters to Osaka University, the surviving collections of historical books possessed by Kaitokudo were passed on to Osaka University. These book collections are symbolic of much that Osaka University inherited from Osaka City. 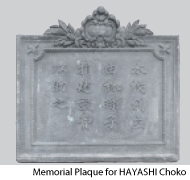 Osaka University and Osaka University of Foreign Studies were integrated on October 1, 2007. Osaka University of Foreign Studies, established as Osaka School of Foreign Languages in 1921 at Uehonmachi, Osaka, had developed remarkably as a leading school of foreign languages and research in western Japan. It produced outstanding graduates, including SHIBA Ryotaro. The university was originally founded thanks to a donation of one million yen by HAYASHI Choko, an Osaka business woman. She donated the money to the national government, insisting that Osaka needed to build a school to develop internationally-minded people. In this way, the two universities that form the present Osaka University share a history of being created due to the efforts of private citizens in Osaka. The integration of these two universities gave birth to the current Osaka University, a leading Japanese national university with three campuses in the Hokusetsu region of the Kansai.

The following slogans and their spirit have been handed down to today's Osaka University. First president NAGAOKA Hantaro's: "Do not lick the sake lees." [Do not imitate others. Forge your own path.] At the founding of the School of Engineering Science, 6th President SHODA Kenjiro's: "Create genuine culture by fusing science with art." 11th President YAMAMURA Yuichi's: "Live Locally, Grow Globally."

For more information, please peruse the links below. 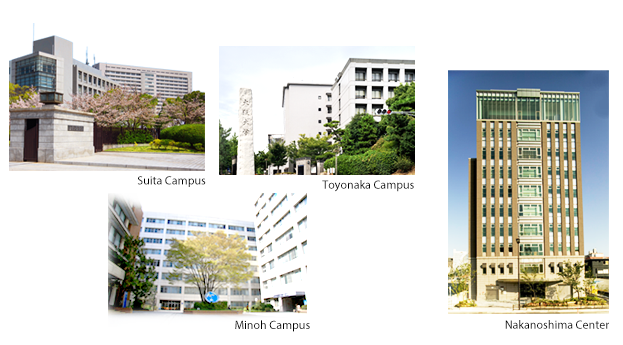 "Utilizing True Worth of the Individual for the Evolution of OU"